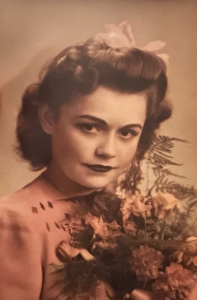 Zoe Marie Hunt, 95, departed this world on June 9, 2022, surrounded by loving family and safely in the arms of her Lord and Savior, Jesus Christ, the faithful and Good Shepherd.

She leaves behind her beloved sons and daughters Robert Hunt and wife Bonita of Houston, TX; Daniel Hunt of Tehachapi, CA; Sue Minor and husband Jerry of Marshfield, MO; Lori Barrick and husband Brad of Spokane, WA; JoAnn Sullivan and husband James of Beebe, AR; and Carolyn Davis and husband Keith of Cleveland, OH; as well as 17 grandchildren and 19 great-grandchildren.

Zoe was born October 30,1926, in St. Louis, MO. Her parents separated when she was six years old, and she grew up as an only child of a single mother through the Great Depression and WWII. But her mother Della was smart and strong and independent, and was a devoted mother who raised her daughter to work hard in school and learn to help in their small family grocery store. But Zoe said that having grown up an only child, she always wanted to have a houseful of kids.

Because of her hard work in school and her mother’s frugal savings, Zoe was able to enroll in the city’s best and most prestigious Catholic girls’ high school, Rosati-Kain. She had to get up early and take three streetcars to get there every day, but she graduated with business and secretarial and social skills that she utilized all her life.

In 1946 she married Robert Lowell (Bob) Viets. They both worked while he attended night classes at Washington University in St. Louis, and he graduated with a degree in accounting and finance. He went on to work for Wagner Electric in St. Louis, a nationwide electrical manufacturing company, as an accountant and analyst.

From 1951 to 1959 Zoe bore Bob six children. His job was stressful, but when he came home from work he was a wonderful husband and father. Tragically, he suffered a ruptured aneurism in his brain, and died on December 15, 1959. Their newborn, JoAnn, was only one month old.

Her neighborhood community and church community and relatives poured out love and support and generosity that was remarkable. But she still needed to have a regular income to support her family. She could have taken a high-paying job downtown as an executive secretary (which she later did), but she felt that she had to stay close to home for her children, so she took a job as a hostess/assistant manager at a Howard Johnson restaurant nearby. She would get up at 4am every weekday, open the restaurant for the employees and stay long enough to make sure that all was in order. Then she would return home, make sure that all the kids were up and dressed and fed and on the school bus, and then return to work through the lunch hours. Then she would go back home to clean and cook and be there when kids got home to help with homework, serve dinner, clean up, and spend time with kids. Then baths, bedtime, and set her alarm. Then wake up to another day like the day before. If you look up “Salt of the Earth”, there should be a picture of her.

By 1963 she was able to take a job downtown as executive secretary to the regional vice-president of Maryland Casualty Insurance Co. One of her duties was to take reports and calls from the traveling field agents who called on independent insurance agencies throughout the region. That was how she met Carl Hunt, who would become her second husband and her knight in shining armor. Like the parable that Jesus tells in Matthew 13:44, Carl had found a treasure in Zoe, but he had to buy the whole field – rocks and weeds and six children and all of the work and sacrifice required.

But Oh, what a treasure! He gladly bought the field, and they were married on July 25, 1963, and he became a loving partner with her and a loving father to every one of her children. And on August 28,1965. Zoe gave birth to her seventh child, Carolyn.

Also in 1963, Carl bought an independent insurance agency in Cuba, Missouri from a retiring agent that he had regularly visited as a field agent. The new family moved to Cuba, Mo in 1964. Carl was successful there, and was elected to the city council for two terms and mayor for two terms.

Zoe was a great First Lady. She was instrumental in the founding and operations of several community service organizations, including the Arts Council, the Girl Scouts, and the Women’s Business Association. She was also an asset to Carl when he was elected to the presidency of the Missouri Association of Independent Agents. She also bought the local flower shop in 1967 and had a natural talent for creating beautiful arrangements. She loved working with flowers, but even more she loved meeting and working with families and being able to brighten their world with beauty.

Zoe and Carl continued in love with each other through many more life experiences. They retired to Lake of the Ozarks and to Brownsville, Texas. They spent several years together traveling the antique show circuit as vendors, and then moved to Houston to be closer to their growing clan. Carl started working for HEB in 1996 at the age of 72, and worked for 21 years until retiring in 2017. They moved into the independent living Brookdale Memorial community in 2017, and continued to be active and made many more friends. Carl passed in 2019, but Zoe remained active and alert until her heart just ran out of beats.

Zoe has been the humble matriarch of a great extended family, all of who look up to her as an example of love, commitment, determination, and faith. Even outside the family, she was recognized as a true friend by so many.

The family would like to express special appreciation and gratitude to all of the hospice workers at Harbor Hospice and to the loving staff of Brookdale Memorial City. Also, special thanks to Bonita Hunt, Zoe’s daughter-in-law, who lovingly helped Zoe so much when no one else could be there. Bonita will deny that she deserves any special recognition for what she considers to be “a privilege to be with my best friend.”

Zoe was so special to so many people for so many years that this eulogy cannot adequately describe the magnitude of the influence of this humble and devout woman. At her passing, all who were present will attest that the Holy Spirit made it abundantly clear that God’s favor is on her, and that He treasures her and will keep her forever in His presence.

There will be a short burial service at 11:00 am on Wednesday at Memorial Oaks Cemetery, 13001 Katy Freeway, Houston TX 77079, followed by a time to celebrate her life together with food and friendship.