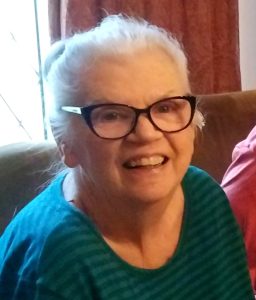 Thomasene “Tomi” Van Fossen Christman passed away on August 22, 2022 in Kingwood, Texas, at the age of 81.  She was born in Mobile, Alabama, to loving parents Thomas Lee and Margaret Van Fossen on March 16, 1941 and was raised in Louisiana.

After graduating from LSU with a degree in Education, she and a few close friends launched out on an adventure and moved to Jacksonville, Florida to begin their teaching careers. It was there that her future-husband, John William Christman, Jr. caught her eye. Throughout their lives together, Thomasene would regale how she was drawn to him like a magnet.  He courted her fast and furiously because he knew love-at-first-sight when he saw it!  A little-known secret is that while returning from a date together, just 2 weeks after their first meeting, John spontaneously pulled his car over and asked Tomi to marry him and she agreed!  Then after 5 short weeks of knowing each other, he officially presented her with a ring, asked her to spend the rest of her life with him, and they gave their families the good news.

Tomi is survived by her loving husband John William Christman, Jr. and their three children: Erin Elizabeth Christman (Mike), John “Trey” William Christman, III (Betsy), and Van Thomas Christman (Jennifer).  Known to them as “Mimi”, never a day went by that she did not have a kind word to say about her five grandchildren Jade Brenna, Van Thomas Jr., Theresa Thomasene, Rebecca Ashlynn, and Chloe Josephine.  Tomi is also survived by Margharita Van Fossen Davis– her sister, best friend and partner-in-crime (covertly disguised as soft-spoken Southern ladies, of course), plus five nieces and nephews.

Being a positive, energetic educator seeped into all aspects of Tomi’s life.  She embraced every opportunity to create “learning” tea parties, teddy bear picnics, and dress-up plays for any children who spent time with her.  She didn’t think twice about spontaneously bursting into animated song if she thought it would help a child remember a lesson. She led a long, exceptional career teaching elementary school and won multiple awards for her passion to better the lives of the children that she taught.

To say that Tomi will be missed is an understatement.  Friends, relatives, and colleagues alike will not help but smile when they look back and remember dining out with her, replete with bright rosy cheeks, sparkling blue eyes, and a huge smile, saying “I’m being really wild!” and sipping a margarita through a straw.  She will be missed indescribably.

Details for an upcoming Memorial Mass at St. Martha’s Catholic Church in Kingwood, Texas will be posted on the family’s social media pages.  An additional ceremony will take place in Lake Providence, Louisiana, where Tomi’s ashes will be added to her parents’ grave and white homing doves will be released to circle the grave site before flying off into the sky.