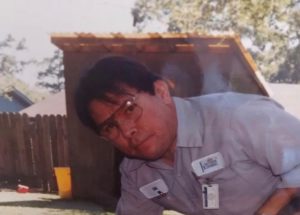 Selerino Lopez Nevarez (“Sal”) passed away peacefully In Houston, Texas on January 6, 2023, after a 33 year struggle with Parkinsons.

Sal was born in 1949 in Roswell, New Mexico to parents of Mexican descent, Anastacio Nevarez and Gaviela Nevarez. He graduated from Dexter High School and went on to obtain a Master Plumbing License in 1983 from The State of Texas. Subsequently, he became self-employed and CEO of Eastside Plumbing.

Sal’s children from his marriage to Ester Nevarez, Jon, and Daniel, brought him much joy. With his family he enjoyed raising his two sons, reading, drawing, oil painting, creating art, listening to music, and especially loved dancing. He found much pleasure in helping others, and in sharing his knowledge of life. Especially memorable are endless efforts to afford his brothers, sisters, nieces, and nephews back in Roswell the opportunity to create better lives for themselves, by continuously motivating them to push for better and giving them the opportunity to change their branch of the family tree.

Sal also treasured his grandkids in his later years. He attended every practice and every game without fail. For his grandkids Brianna, Krystal, Jon Louis, Ivan and Mia there wasn’t an event he would miss. He would do anything for them. ( Remember: give it 100%)

Sal’s work ethics and scholarship focused on educating and giving back to those in need. His teachings may have not been to the vast but to the many it made a world of difference. Having left an impression on so many people, some who still provide for their family as master plumbers today and some who just stayed in touch for his sincere heart and some for his dedication to family and friendship.

In late 1990, Sal was diagnosed with Parkinsons. He was a very willed man who was not going to lay down and allow this crippling disease to win that easily.  After being diagnosed with Parkinsons he was forced to stop working. That fueled the push to begin enjoying the rest of his life. This led to him fighting the fight of his life. Sal started working out and running to stay active in order to give Parkinsons a run for its money. Attending his boys and grandkids events were top on his list of things to do. He went on to assist his sons to also become business owners in the plumbing industry. It didn’t stop there either; his passion was so strong his two grandsons followed suit to become plumbers as well.

His legacy will carry on forever reminding us that we all can accomplish what we set our minds to. We control our future by controlling our actions and our attitudes. There are no words that can express how grateful and blessed we are to our family and friends who were there for us during the time of his passing.

A celebration of life service will be held at Darst Funeral Home's garden on Saturday, January 14th, 2023, at 12 PM. There will be a reception to follow the service that same day.

Thank you for sharing your Dad’s journey with us. His courage while fighting PD has been very inspirational. We could see the immense love that you had for your Dad.

Our thoughts and prayers are with you and your family.

I’m so sorry for your loss. I lost my father a few years ago and while I can’t say that it ever gets “better” with time, what happens is instead of focusing on the loss you will focus on all of the wonderful memories. Hard days will still happen, but you will eventually focus more on the happiness you had together. Sending all my love to your family.

Our hearts go out to our family in the loss of this great man. You all should be proud of the man Sal was and can honor his memory by following his example. We will keep you lifted in pray and trust that God will heal your hearts a little more each day. Know that we love you and are here to support you in any way that we can.

He will deeply be missed but he’s left very nice memories to he’s families and friends. May you Rest In Peace. He’s home in heaven. 🙏

The Galvan families shares our condolences for your loss. It was our pleasure to have known Sal and the Nevarez family our entire lives. Sal was not only a hard worker and dedicated father, he was also an inspiration. It was an honor to have witnessed Sal raise two young boys into two great men. What more could any father ask of his kids. Sal’s presence will always be felt, and his legacy will carry on. Peace be with you and your families, my brothers.
Sincerely The Galvan Family

We would like to impart our most heartfelt apologies for your loss. Our families were neighbors for years in what seems like a lifetime ago. So many of us would gather at Sal and Ester’s house so often that it truly felt like a second home. Despite this bygone era, Sal and family never left our minds. Thanks for the memories and Godspeed to him as he embarks on his next journey.

We have had the pleasure to have met Sal on several occasions. Our deepest condolences, both Val and I have experienced the loss of our fathers. We can only provide emotional support as our experience have presented us. The love, experiences, memories, and loss of your father will always be with you. Our thoughts and prayers are with you all. We wish we would have the words to help to make it all feel better. The truth is we don’t but we are here to be a confront and loving support ❤️. The Cendejas Family