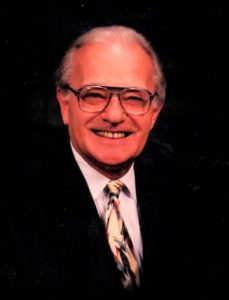 John was born in the Bronx, New York, to the late Valentin Schuhmann and Anna Buchberger Schuhmann. Being very curious, intelligent, and industrious, at the age of eleven he conducted a science experiment, accidentally blowing up his parents’ basement.

When he was seventeen, John could not wait to enlist in the United States Navy during World War II, where he proudly served as a medic on the U.S.S. Constellation. After the War, he continued his education and embarked on a career in the insurance business. He owned his own insurance agency and later joined Johnson & Higgins in New York. John was transferred to New Orleans, where he met his wife, Moira. After briefly residing in New Orleans, he was lured to Texas by his good friend and client, Mr. Walter Cooley. John was offered a position as Partner at John L. Wortham and Son, LLP. He accepted the challenges and moved to Kingwood, Texas in 1985. It did not take much time for John to become an ardent fan of the Houston Texans, the Houston Rockets, and the Houston Astros.

John was a devout Catholic at St. Martha’s Catholic Church and it was there that you could hear his wonderful voice singing carols and hymns.

They say that “The measure of a man is in the lives he’s touched.” John impacted more lives than the stars in the sky. He was foremost a patient, kind, trustworthy and generous man who loved unconditionally and will be greatly missed.

Graveside services will be held at the Houston National Cemetery on Thursday, July 5th, 2018.

Interment: A graveside service was held on 2018-07-05 at Houston National Cemetery. Attendees to arrive in Lane 1.

One condolence on “Schuhmann, John V”

John is my first cousin, once removed. I remember him when I used to visit his parents’ home in Westchester, NY. I remember how totally dedicated he was to his son, Richard and that dedication paid off. Rest in peace John but come back soon, the world needs good fathers like you.