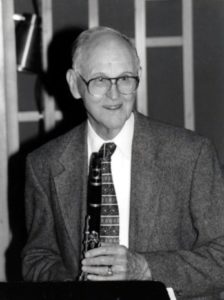 Hugh A. Saye passed away on August 24, 2018. Born in Wichita Falls, Texas, on June 29, 1923, the son of Hugh A. Saye Sr. and Victoria Saye, he grew up in nearby Electra, where he graduated from high school in 1940. He attended Rice Institute (now Rice University), from which he graduated in February 1944, with a B.S. degree in Electrical Engineering. Hugh then went directly into the U.S. Army Signal Corps and within a year earned his commission as 2nd Lt. In late 1945 he was shipped to post-war (occupied) Europe and was stationed in Bremen, Germany, where he took over the civilian long distance telephone exchange for use by the U.S. Army Signal Corps. In Bremen, he was promoted to 1st Lt., and was discharged at the end of 1946, by this time fluent in German.

Returning to Houston in 1947, Hugh was employed by an engineering firm, and in 1949 became a Registered Professional Engineer in the State of Texas, a qualification he retained for over 60 years. He then joined forces with a colleague to set up an engineering company to design and produce automatic control systems, eventually pioneering oilfield automation before selling the company to what is now Fisher Controls.

In 1961 he joined ITT and made his landmark move to England as a senior manager. Over the following years he traveled throughout Europe on business and learned Italian. In 1966, he met his soon-to-be wife Rosemary. They married in Oxford in December 1967, and resided in St. John’s Wood in London for several years before moving to Gerrards Cross, west of London, not long after the birth of their son, Christopher Dale George Saye. Two years later, daughter Victoria Anne was born.

In July 1976, Hugh, Rosemary and their two children moved to Houston, and settled in Kingwood where Hugh and Rosemary have resided ever since. Hugh worked in several finance-related jobs in Houston prior to becoming an independent consultant in 1988, which he continued doing into his 90s.

Hugh was an active church member throughout his life and prior to his death he was a member of Kingwood Bible Church, where he had served as an elder for several years.

Hugh’s love for music cannot be understated. He played the clarinet and sax, and for many years was a member of the Musicians Union in Houston. Jazz was his passion.

In lieu of flowers, the family requests that donations be made in Hugh’s honor to the Star of Hope Mission in Houston or to Kingwood Bible Church.