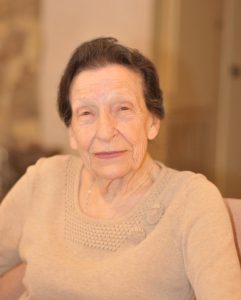 Ruth Marguerite Grim, passed away peacefully at home in Kingwood September 2, 2022 at the age of 93. Ruth was born July 14, 1929 in Ontario Canada, but was raised on a farm in Cheboygan, Michigan.  She moved to Houston in the 50’s where she taught ballroom dancing and met her husband Joe by becoming his dance instructor. Ruth was a Kingwood resident for 52 years and a member of St. Martha’s Catholic Church since it’s founding in 1979.  She was a devoted wife and loving mother of three children.  She enjoyed gardening, cooking and being Supermom.

Ruth had an open-door policy welcoming all who entered her house, and she loved the youth. Her kitchen was usually occupied by at least one or two of her children’s friends who just stopped by to “rap” (what they called chatting back in the day).  Faith and family were the two most important things to Ruth, and she exemplified that in her constant love and availability to her husband, children, and grandchildren.    Ruth was a doer.  She loved doing for others, and she emulated St. Therese of Lisieux every day by doing little things with great love.  Her children and grandchildren are most appreciative of the hundreds, if not thousands, of loads of laundry she washed and folded while living with them towards the end of her life.

Ruth is survived by:

She is preceded in death by:

Baskets will be provided in the narthex of the church during the visitation and funeral.