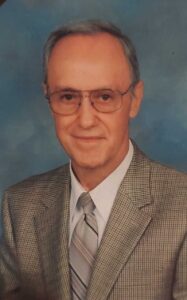 Robert Jenkins Guillerman, age 89, of Porter, TX passed away on Wednesday, March 23, 2022. Robert was born on November 3, 1932, in Uniontown, Kentucky. His parents were Antonin Gaston and Mary Jenkins Guillerman (lovingly called Tony and Jesse). He was the fourth of seven children, who were all boys except for one girl, Joan.

He attended St. Agnes school in Uniontown, KY until eighth grade. He then attended St. Mary’s High School, and in his last year there he enrolled in St. Mary’s seminary program, near Louisville, KY. He completed a BA in Philosophy and then spent another year obtaining his BA in Theology, with the intent to become a Catholic priest. However, after graduation, he enlisted in the United States Army in 1956 and was stationed in Germany.

Bob was married to Elizabeth (Betty) Louise Bentley on January 7, 1961, at St. Theresa’s Catholic Church in Houston, TX. Shortly after marriage, he joined the Houston Police Department where he worked for 31 years. He retired in 1994 as a Seargent in the Robbery Division. After retirement, Bob and Betty enjoyed spending time with their grandchildren and traveling. The highlight of his life was a pilgrimage trip he and Betty took to the Holy Land.

They both were active members of Sacred Heart Catholic Church in Conroe, TX.

He is preceded in death by his beloved wife, Betty, his son, Chris, his brothers Jerry, Maurice, and Mike, and his sister, Joan.

Bob was strongly committed to his family, to his career, and most importantly to his church and to God. He was a loving and generous man, making several donations to many different charities over his lifetime.

Fond memories and expressions of sympathy may be shared at www.darstfuneralho.wpengine.com for the Guillerman family. Please feel free to sign the guestbook for Robert Guillerman.

Flowers can be sent to Darst Funeral Home, Kingwood, TX.

Or in lieu of flowers, a donation can be made to:

One condolence on “Robert Jenkins Guillerman”

Bob was a friend and classmate at St. Agnes School. We were in most of the grades and high school together except when my family and I moved to Evansville Indiana during World War 2. We lost touch over the years and then reconnected a few years ago through his brother. We enjoyed a few phone calls and notes. I just learned of his death today. I am sorrowful but know he is in Heaven with Betty.
My sincere condolences to the family. May he rest in peace. Barbara Alvey Campbell