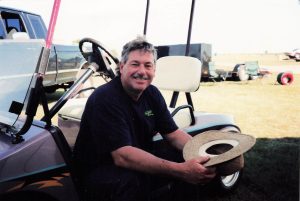 After his battle with cancer, it is with great sadness to announce that Robert Clay Williams has passed away in the early morning of Thursday, November 10th, 2022. Robert was a beloved husband, father, Pawpaw, brother, uncle, friend and neighbor. It is quite impossible to put into words the astonishing life he lived and incredible impact he has made on so many.

Born on January 17th, 1950, to Robert F. and Margaret Williams of Jacinto City, Texas, he was naturally curious and gifted when it came to working with his hands. In the words of so many, “he can literally do and fix anything!”. He married the love of his life, Debra, in 1978. Robert’s career started at Armco Steel for 13 years and he retired after 38 years with Austin Industries in Baytown at the ExxonMobil facility where his son, Ryan, would eventually join him. Outside of work he was a devoted father and encouraged his children to follow their dreams. Many weekends would be spent at any racetrack all over the country where he was the Crew Chief for the Williams Racing team. The family made countless memories, lifelong friends and stories to tell and pass down for eternities. When they weren’t racing you could most likely find them camping, a tradition still carried on today by the entire family. Robert and Debra experienced insurmountable heartbreak in 2006 at the passing of their daughter, Kourtney, after her battle with leukemia. In 2018 Williams Racing traded in the drag strip for the go kart track when Robert’s granddaughters ventured into go kart racing. Once again, he found himself as Crew Chief and passed down his passion for racing and cars to the newest generation.

Robert’s passion for classic cars and just about anything with a motor is what drew so many people to him. He was always willing to lend a helping hand and had an uncanny ability to fabricate anything. Robert owned numerous cars and boats over his nearly 73 years including winning the ISCA International Class Championship with his Baja Bug. During the last few years, he was steadfast in finishing his ultimate dream project, a ‘55 Chevrolet Nomad. His love for his family was never in question and he absolutely adored being a grandfather.

Robert, the patriarch of the Williams family, will be missed beyond words. He is survived by his wife Debra, son Ryan and his wife Stephanie Williams, their children, Evalyn (9), Tyler (3), Payton (14), and Haylee (12). By his bonus son, Ronnie Sobol. By his daughter Shelia Dawn, her children Zachary Goodson (20), Brandon Goodson (26) and his children TJ (2) and Maya (5 mo). By his sister Ginger Mitchum Paradis. By his brother-in-law Rex and his wife Nancy Buzbee. Along with many nieces, nephews and extended family and friends.

He is preceded in death by his daughter Kourtney and parents Robert F. and Margaret Williams.

The family wishes to express their appreciation for the compassionate care given to Robert by Choice Hospice. A memorial service celebrating his life will be held on Saturday, November 19th, 2022 at 3:00pm at Darst Funeral Home (796 Russell Palmer Road, Kingwood, TX 77339). There will be a reception to follow. Dress code for service is Car Show Attire. Robert spent much of his life in the shop wearing jeans and a t-shirt, covered in oil and grease! He wouldn’t want his Celebration of Life to be done any other way.

Robert was a great guy and co worker in Baytown. No matter the need, you could always call on Robert. He always volunteered to donate platelets at our blood drives and would help find other donors. In large part to his efforts, we did exceed our platelet donor goals! He was always helpful at United Way auction events . But most of all, away from the work place, when I needed help making a ‘go-fishing’ pond for special needs children ‘s Special Rodeo event, he made it! Robert and family also attended the Special Rodeo to support the event. He always had kind words and a heart bigger than Texas. My condolences to the family.

I first met Robert when I walked into the contractor’s trailer in February 1983 for a job at Exxon for a unit start up. We got to talking and found that we were both ex steelworkers, he from Armco, me US Steel. I enjoyed working with him those years we worked together first with Dandol then with Austin. Even after getting hired by Exxon we stayed in touch at work. Robert was one of a kind and a great co-worker who I know will be greatly missed by family, friends and ex co-workers. My deepest sympathies to the family.

I had the pleasure of working with Robert for a number of years and he was always a blast to talk too, always talking about his Cars and Family adventures. Great Guy!