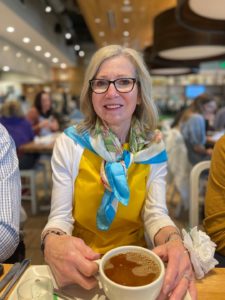 Rita Marie King, of Kingwood, TX, passed away on December 13, 2022. She was born on October 23, 1952, in Beaumont, TX, to Joseph Anthony Chiappetta and Mary Lou Ainsworth. She was the oldest of four children and lived briefly in Pensacola, FL, and Savannah, GA, while her father was in the US Air Force. The family settled in Houston, TX, where she attended Immaculate Conception Catholic School through 8th grade and then Stephen F. Austin High School, graduating in 1971.

While in high school she worked at Battelstein’s department store in downtown Houston, and later at Busch Gardens where she met her husband Robert King. The couple married on March 4, 1972, at Immaculate Conception Church, and moved to Friendswood, TX, in 1973 where she attended Mary Queen Catholic Church. She loved being a stay-at-home mother during the children’s younger years, and later began a career in the insurance industry, most notably at State Farm.

Her most cherished times growing up were spent at the family’s beach house on Bolivar Peninsula, TX, where she spent countless hours playing outside with her brothers and cousins. It was during these times she developed a special bond with her grandparents, Gus and Hilda Chiappetta.

Rita was a beloved family member, friend, and neighbor and was admired for her abilities to nurture, listen, empathize, support, and serve. She had many artistic talents and specialized in creating stained-glass pictures and watercolor paintings. In retirement she took up an interest in yoga and became a yoga instructor at a local community college.

Among her favorite travel destinations was the island of Sicily, Italy, where she once visited the town of Salaparuta, the birthplace of her beloved grandfather Gus. Throughout her married life she enjoyed the company of dogs; she developed a particular fondness for Weimaraners, adopting three over the last 30 years – Blue, Trevor, and Chandler.

She became a grandmother in 2006 and loved spending time with her grandsons and granddaughter, the latter of whom she formed a special bond and common love for the beach and ocean.

Rita is preceded in death by her father, Joseph Chiappetta, mother, Mary Lou Ainsworth, and grandparents Gus and Hilda Chiappetta.

We are sorry for your loss. Rita was one of the first people to welcome us to the Barrington.

We are so sad at Rita’s passing. As young cousins we made some wonderful memories at the beach. I was born about 2 1/2 months after her….so we always had fun when we got together. She was a special person and she will be missed!