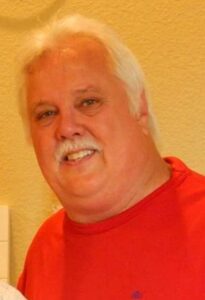 Richard “Ric” Halbrook passed away at his home on Wednesday, March 23, 2022. Ric was born on August 17, 1956 in Pomona, California to Rich and Joann Halbrook. Ric graduated from West Covina High School in 1974 and shortly after that, the family moved to the Houston area, where Ric and his dad worked for Six Flags Astroworld.  Ric was an incredibly talented electrician and spent time with Astroworld as their Animation Specialist, bringing joy to many with his creations.

Shortly after, Ric met the love of his life, Cathie Mae, and they married in 1981.  The family settled in Humble, Texas and became an integral part of the community.

Ric is preceded in death by his parents, Rich and Joann.

In addition, he is survived by many nephews, nieces, cousins and friends.

Ric was well-known and well-loved in his community.  From the time his children were small, Ric spent most of his spare time coaching little league teams, was a Scoutmaster for the Boy Scouts of America, and countless other activities where his kids were involved.

After his kids were grown, he became a valuable member of the Humble ISD Rodeo & BBQ Cookoff Committee, and it was his absolute passion.  Ric provided years of service to the children of Humble ISD and the greater Humble Community through his efforts with the committee.

There will be a Celebration of Life for Ric at a family home on April 2, 2022.

Ric my friend, so many memories and even more laughs. We had a lot of fun, swim team and HOA Board just to name a few. I always told you that you overcame being born in a third world country and made it here to become a great example of a Texan, an excellent cook and even better person, helping others and wherever you were needed. I pray now that you are in a much better place and will rest in peace. Our condolences to Cathie and all your family. God Bless you my friend, we will miss you very much.

Russell and Donna your tribute to our mutual good friend Ric Halbrook was “spot on” and could not have been stated any better. The memories that we all shared will be with us forever. To know Ric and to be involved with the many youth and civic activities was a joy for all us. Ric we know you are not suffering any long and have gone to a better place. We send our condolences to Cathie and your family.

Ric was my friend and bad joke teller, we often tried to outdo each other. I never knew what was gonna come out of his mouth when I picked up the phone. We never met in person because I was in Birmingham Alabama and him in Houston but we had a friendship that has lasted even after I retired.
So long my friend, not goodbye.

It has been several years since Ric and I hung out, though we shared via social media. The Halbrook Family especially Ric, we a blessing and so welcoming. In our younger years, Ric and I spent our younger years working and having good times together. He even helped me pick out my wife’s engagement ring over 30 years ago. I was shocked to hear of his passing and he will be so missed. Heaven got another gem.

Ric
Just heard about you moving on- you will be missed by your friends. One of which I know we were. Bbq was our common passion along with helping out where we can!! Safe travels Ricky!! We’ll do a brisket when I see ya!!

Mike and I send our thoughts, hugs and deepest Condolences to you Cathie and your family. Ric was a great man, always making us laugh at the cookoffs and tailgating. We enjoyed his funny jokes. My heart is with you Cathie. May God bless you all. Always keep him alive in your memories and in your hearts.
Love ya!

Dear Rick, Cathy and family,
We have just found out that Ric passed on. Our deepest sympathy to the family. We were neighbors with Ric’s parents and were invited to many fun events. We had a chance to meet everyone in the family and always felt welcome. Rest in peace Ric