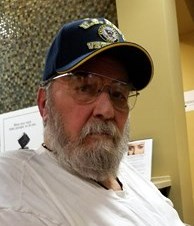 Hughy A. Pritchett was born in Houston, Texas on 10/23/1933 to parents Climmie Ruth Johnson and William Mavra Pritchett. He was raised in Crockett, TX and passed away in Huffman, TX. Hughy was a proud husband, father and United States Navy Veteran. Although Hughy’s children were not his biological children, he never saw them as ‘step-children’. He came into their lives when they were young and chose to be a dad when he didn’t have to. He loved all his children as if they were his own. He is proceeded in death by his parents, his wife, Betty Sue Pritchett, his sister Billie Ruth Pritchett, his children, Elizabeth Sue Wilson and John Roy Hansen. He is survived by his children Johnette Helton, James Robert Hansen, Patrick Roberts as well as numerous grandchildren and great grandchildren. He will live on forever in the hearts of those he loved.

Hughy will be laid to rest on 01/23/2019 at the Veterans Memorial cemetery in Houston, TX. A viewing will be held at Darst Funeral Home in Kingwood on 01/22/2019. A gathering for friends and family will be held at his residence in Huffman, TX following graveside services.

Hughy Arlyn Pritchett was born in Houston, TX on October 23, 1933. He was raised in Crockett, TX. At the age of 12, his five year old sister, Billie Ruth, died tragically to an unknown illness. Hughy graduated high school and then joined The United States Navy. After being honorably discharged with a ribbon of good conduct and National Defense Service Medal, Hughy attended Sam Houston State University for two years while still being in the Navy Reserves. During his professional life, Hughy was a teacher, a mortician, a bar tender, a wrecker driver and a truck driver. In 1970, he met Betty Sue Hansen. He moved in with Betty and helped parent her five young children. Eventually, Hughy and Betty would be married, but not until 1990. They lived together happily for many years in Houston, TX. After retiring, they moved to Willis, TX where they lived together until his wife, Betty Sue, passed away in 2000. Hughy continued to live in their home until a tornado destroyed it in 2016. Luckily, he was not harmed during the incident. Hughy moved to Huffman, TX to live the remainder of his years under the care of his daughter, Johnette Helton. He passed away peacefully in his home on January 18, 2019. Hughy, also known as ‘PawPaw’, was a firm but loving father, grandfather and great grandfather. He will be missed and will live on in our hearts and our memories forever.