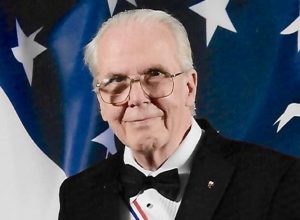 With a heavy heart we announce the passing of James McCullough Jr. on Wednesday, December 26, 2018, at the age of 74.

James Arthur McCullough Jr. was born on December 27, 1943 in Jamaica, Queens, New York to the late James McCullough and Serena (Fairbarin) McCullough. James was inducted to the United States Army in April of 1962, where he performed in multiple capacities until discharging as a Staff Sergeant in January of 1979.

James proudly served as a combat medic in the Vietnam War from 1966 to 1967. Over the course of his 16+ year career, James was awarded the Army Commendation Medal in recognition of his support of the United States Army Medical Command, Europe. James also received personal commendations from commanding officers for his duties in the Joint German/American Lance ASP Evaluation Team, the SHAPE Scoring and Evaluation Section, battery commander, and warrant officer.

His decision to leave the army to pursue his passion of teaching and assisting children was described as “a great loss to his platoon, the battalion, and the United States Army” by LTC, FA Noack. Though, it was later stated by another former superior that “Jim’s greatest strength lies in his ability to empathetically minister to troubled adolescents.”

After honorably discharging from the US Army, James completed a Bachelor of Science at the University of the State of New York Albany and received continuing education credits in graduate studies at Nova University. James dedicated his life to counseling and guiding youth, although he never fathered any children. He served as a licensed special education teacher, respite worker, and a district intake counselor for the Florida, Department of Health and Rehabilitative Services.

James was also devoutly religious. He studied theology at Washington Theological Union and was a seminary student at Order of Carmelites Middletown. Later in his life, he attended services at St. Philip the Apostle in Huffman, Texas where he also served as a Fourth Degree Knight of Columbus.

James is survived by his two sisters; Isabella and Patricia and their spouses and children. In this life, James was loved by so many that he considered family by choice. He found joy in his life in Texas with the Emerick, Chamberlain, Bridges, and Prevot families and the parishioners of St. Philip the Apostle, who stayed by his side until his last breath. He spent his last days overwhelmed with his entire family’s loving support.

His family would like to thank everyone for the outpouring of love and support as we deal with this difficult time.