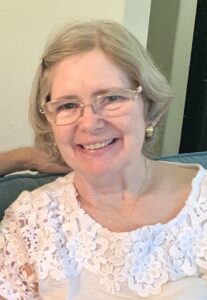 Mary Kerrigan Poli passed away on Tuesday, October 25, 2022. She was 71 years old. A native of the Bronx (Parkchester), New York, Mary graduated from St. Raymond’s School for Girls. Upon graduation, she worked for Standard Oil of New Jersey (now ExxonMobil Corporation), where she met her future husband, Joseph. Mary and Joseph were married on November 30, 1974. They lived in several areas of New York; Queens (Flushing), and West Islip. Exxon moved the family to Flanders, New Jersey in 1983, and Kingwood, Texas in 1992.

Mary was a loving mother, who stayed home to raise son, Kevin, and daughter, Amanda. She also volunteered at their school and served as the school crossing guard. She  worked at several elementary schools upon moving to Texas. She retired in 2009 from Humble ISD, after working 16 years in the district. After retirement, she volunteered at the Kingwood Library. She was a devoted member of St. Martha’s Catholic Church. She dedicated her time to weekly Adoration since its inception. She could also be found serving as an Eucharistic Minister during Saturday night mass.

Mary loved the New York Yankees. She was wearing her Jeter jersey up until her last moments. She was an avid reader, reading multiple books a week. She enjoyed going to plays, spending time with her grandchildren, and eating Italian food. She loved to sing and listen to music. Mary truly valued friendship. She kept monthly phone dates with a friend whose friendship had lasted over 50 years. She looked forward to her monthly dinners with work friends and any time for fellowship.

Services for Mary will be held at Darst Funeral Home at 796 Russell Palmer Rd. Kingwood, Texas at 1 pm on Saturday, November 12th.

The family appreciates all staff at The Bradford Memory Care and Assisted Living for their attention and care over the past eight months. In lieu of flowers, a donation to the Alzheimer’s Association would be preferred.

Services for Mary will be held at Darst Funeral Home at 796 Russell Palmer Rd. Kingwood, Texas at 1 pm on Saturday, November 12th.

Joe
May God grant you and the family comfort as you navigate this difficult time.
I have fond memories of Mary at the family celebrations and your visits to Dallas.
God Bless you.
Kim Fulkerson

I am truly devastated by the passing of my friend, Mary for over 50 years. I will always remember the good times we have had. She was godmother to my son. Matthew and I am godmother to her daughter, Amanda. Yes, we were like sisters. I will always remember, too, how she loved the Yankees. Go Yankees! I will always miss you my dear friend, Mary but I will never forget the great times we have had. With you whether it was in queens, Flanders or Texas. And even cape May. And we had a great time in Hilton head too – Tyner island. Oh Mary, I loved you so and always will. You will always be in my heart. Your friend. Joanne

Joe, Kevin, Amanda And the entire. Poli and heter family. I want to express my deepest condolence to you all. I know the good memories you have will help you get though this very difficult time. You are in my thoughts and prayers. May. God bless you. With loving thoughts. Joanne and tom Donovan.

Rest in peace, dear friend! Remembering fondly those long-ago high school years and family visits later on. Sending love and heartfelt condolences to Joe, Kevin, and Amanda and your families from the Clancys.

Rest In Peace Aunt Mary! Your kindness and love for your family will always be remembered. May God bless your family, especially Uncle Joe, Kevin, and Amanda. We take comfort in the belief that your suffering is over at you are now in the presence of God. Thank you for being such a wonderful Aunt and a great sister to my Dad.

I will miss our regular theater nights and lunching with Mary. She could always be counted on to cheer against us whenever the Astros and Yankees played. Great rivalry! And I enjoyed hearing about her visits to Madison Square Gardens for various concerts from her time in New York – jealous! She had such different beginnings than I did growing up in the south; but we also had so much in common – libraries, growing up Catholic, music. She was always interesting and will be missed. Thank you for sharing her with us.

We are sorry we will be not be there but we are thinking of you all and will be watching via the link. We will always remember Aunt Mary throughout these years and will never forget all the birthday and Christmas wishes she sent us. We love you all and hope you see you in the new year.
Love the Schachts and Denglers