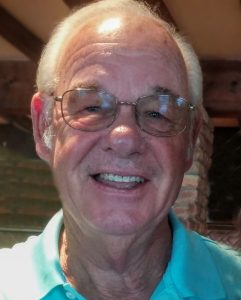 Larry Eugene Shiflet passed away on August 2, 2022. He was born in Iola, Texas on September 2, 1940 to Cecil and Estelle Shiflet.

Larry was one of seven children. He kept his family close and spent most Saturday mornings having breakfast with his brother, sisters, nephew and friends. He spent nearly every Sunday morning with his son, Brad, sharing a cup of coffee. Brad was his proudest achievement, he often said. Brad’s wife, Susie, was a loving and dear daughter to him and their beautiful daughter Laryssa – his namesake – was his absolute delight. During his life, he particularly enjoyed racing cars, playing the drums and guitar, fishing and playing golf.

After leaving Sam Houston High School, Larry served in the United States Air Force as a security specialist for four years in Alaska. He often said he joined the military because his beloved dad would make him be home in bed before midnight, which he didn’t like at all, and decided he would be in charge of his bedtime. But in the Air Force, much to his dismay, he had to be in bed by 9!  He returned to Texas and worked for the Southern Pacific Railroad as a special investigator. Later, he joined the Harris County Precinct 4 Constable’s Office and rose to the position of Assistant Chief where hundreds of officers served with him. Even those who did not personally work with him knew of him and his legendary reputation.

His law enforcement career lasted more than 50 years. He touched hundreds of thousands with respect and kindness; tributes to his loyalty and caring have poured into his family. Larry was given many accolades and honors, most notably being named Citizen of the Year in 2006 by the Lake Houston Partnership.

Upon retirement, he bought an RV, a boat, new golf clubs, a few new guitars, several new fishing poles and then simply enjoyed every moment. He particularly loved spending time with his treasured dogs, Cash and Greta.

Larry and Cynthia married in November of 1999. They had nearly 25 years of happiness together. They founded the Tribune Newspapers in 2007 and enjoyed serving the community in the news business. They adored each other and had a love story for the ages – everyone felt it.

He was a great dancer – he and Cynthia were often the last couple on the dance floor at parties and galas. He was also a marvelous musician, having taught himself to play the drums and acoustic guitar. In his younger years, he played in bands across north Houston and loved every second. Four years ago, he decided to learn the bass guitar and was very talented. He, his brother Gary, sister Betty and good friends James Andrews and Ben Lafollette formed a band and played for hours every Monday.

Larry had the rare ability to meet people and form instant friendships. Everyone adored him and thought he was one of the finest men they ever knew. He was patient, kind, generous, fair and smart. He was patriotic, responsible, steady and loving and set an example for so many. He also was always on time and often told Cynthia if they weren’t 30 minutes early, they were late!

Always easy going, friendly and quiet, when asked how things were going, his usual answer was, “Great! I’m just Cadillacin’ on a Volkswagen frame!”

Donations, for those who wish, should go to Jade’s Legacy, the rescue group who gave him his beloved Greta. Visit JadesLegacy.org, scroll down on the home page to ‘help our cause’.

Larry was one of the most kindest and caring persons alive. My husband was in a car accident and we had questions about the police report. He came to our home, looked at the report and offered advice. He also brought some of Cynthia’s bread that he said he wanted to share with others it was so good. I have the greatest respect for a live well lived. He will be missed by many. God bless him and his family.

We hadn’t seen Larry in many years, I am sorry to hear of his passing. Actually the last time we saw him might have been when several of us went to Mexico. He did love his dogs. Years ago he had Shane, they were quite the pair, he loved that dog. Larry was very kind and quite funny. May he rest in peace in God’s loving arms.