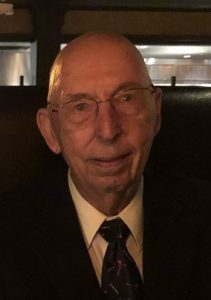 William Howard King quietly passed away on November 29, 2019 in Kingwood, Texas. Bill, as he was known, was born on March 10, 1929 in San Francisco, CA to William and Grace King. He attended San Jose State University and graduated with a degree in Accounting. While at SJS he met the love of his life, Jane Moose, and married on January 23, 1955 in Pacific Grove, CA. Soon after,  they started their lives together in Fort Worth, Texas while Bill was serving in the United States Air Force as a Flight Engineer.

After leaving the Air Force, Bill joined the accounting firm of Touche Ross Bailey and Smart in San Francisco and the couple moved back to California. After 22 years with Macy’s California, Bill retired as a Vice President and set his sights on playing as much golf as possible. After a move to Wilsonville, OR, Bill became very involved in the Oregon Golf Association where he was a Rules Official for ten years; he even earned the prestigious Distinguished Service Award. Bill enjoyed traveling extensively with Jane throughout Europe and didn’t miss an opportunity to play some of the great golf courses in Scotland and England. He was a former longtime member of the Olympic Club in San Francisco and both Oswego Lake Country Club and Charbonneau Golf Club.

Bill is survived by his loving wife of 64 years, Jane King, and their daughter, Karen Emery, and son-in-law Paul Emery.

His smiling face will be missed by all.

A graveside service will be held at Houston National Cemetery on Thursday, December 12, 2019 at 11:15 am for Mr. William Howard King. Attendees are asked to arrive in Lane 2 for interment.

***Upon entering the cemetery, on the right hand side are two long lanes. Lane 2 will be on the far right-hand side. If you have any questions, we at Darst Funeral Home can answer any question you may have.

We will remember Bill as a kind person whose genuine smile always reached his eyes. Our prayers are with you, Jane, Karen and Paul. Heaven has a very special soul who will be missed by all who loved him.

So very sorry…Lots of love!

Our hearts are with you all during this difficult and sad time. Wish we could be there in person but know we are the in spirit.. love Pat and Vickie

Very sorry to hear this sad news. Blessings to your family.

We are so sorry for your loss. Karen, our thoughts and prayers are with you and your Mom. Hugs.

Dear Karen, we are so sorry for your loss! May all your good and happy memories of your dad help you through the time of grief. I know what it’s like – it’ll take time. We are all with you and your family in out thoughts. Hugs an kisses from all of us.
Sabine and family

I played golf with Bill here at Charbonneau, and we had breakfast at the Wild Hare on many a wet Saturday morning. During our conversations we solved many of the world’s problems. LOL He was a special friend, and he will be missed by everyone here in Charbonneau. Jane, I am sorry for your loss.

Jane, so sorry to hear of Bill’s passing. He brought such pleasure and fun to my Glen with his Fantasy Golf game in Charbonneau. You were both such wonderful friends and assets to our village. Blessings.

Dear Jane, Joanna and Ijust found out about Bills passing.We are so sorry for your loss. Bill was such a good friend for so many years We started playing together when I first moved to Charbonneau Bill and Abe Johnson were looking for o new young guy to add to their foursome. I enjoyed plaing with bill. I learned alot from Bill.Jane take care of yourself. Rick and Joanna Sawyer

Jane – I send my sympathy to you. I remember how much you and Betty Lou contributed to the Niners, and how Bill always helped.

The Charbonneau Niners are sending our deepest condolences for your loss. May memories of Bill comfort you now and forever.

When I first saw Bill play golf at Charbonneau, my first thought was wow, this guy is good. He never needed a GPS because he had every hole paced off from a tree or a house. Always a gentleman and a pleasure to play golf with. To Bill it was always a bunker, never a sand trap. Before he left Charbonneau for Houston he would join a few of us for breakfast on rainy Saturday’s at the Wild Hare in Canby, where we were able to solve all the world’s problems over pancakes and eggs.
Very sorry for your loss Jane

Jane, I just returned from So. Cal. and saw Bill’s obituary in the Wilsonville paper. I am still in a state of shock. I just talked to him not long ago and he was telling me how happy he was in Kingwood. I will miss helping him with his electrical projects and , of course, playing golf with him. Many fond memories. Susan and I exited our most heartfelt sympathies to you and your family.

It was most fortunate that I had the privilege to first meet Bill through his volunteer work with the Oregon Golf Association. Oh how he loved golf! All aspects of the game, not just playing. He helped with rules for tournaments and juniors, worked with the course rating team and was available whenever a need came about. He is one of only a handful of people that have received the OGA Distinguished Service Award.
Then when we moved to Charbonneau there was the opportunity to play golf with Bill. And the stories we were able to coax our of him about his golf experiences around the world and at the Olympic Club were wonderful. And his desire to play well was there all the time. I remember watching him practice putting just before he moved to Texas.
While I am saddened with our loss, I am pleased to have such a vast appreciation for Jane and Bill and what they added to my life.
Never forgotten.