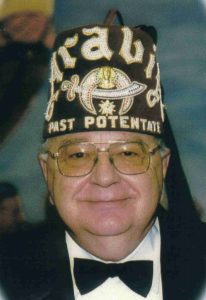 Joseph Carl Zettlemoyer was born in Danville, Pennsylvania on August 27, 1940 to Francis L. and Mabel S. Zettlemoyer.  He moved to Naugatuck, Connecticut in 1943 when his father was transferred to U.S. Rubber Chemical plant which was taken over by the government during the war.

Joe grew up in Naugatuck and always said it was the greatest place to grow up. After graduating from Naugatuck High School in 1958, Joe joined the Army in November of 1958. While in the ARMY he was assigned to duty in Kaiserslautern Germany, in 1959, where he served for two years.

Upon return from Germany, he purchased a Ford Convertible. He went to New York to visit some friends, they wanted to take a ride in the convertible, and suggested that they go visit a friend. While visiting these friends their daughter came home and introduced herself as Helen. Helen and he dated from that time on and became married on September 16, 1962.

In 1981 Joe, Helen and family moved to Kingwood, Texas.  Joe started his own business as a Manufacturer Representative, Advanced Fluid Systems, selling capital equipment for the separation, filtration of gases and liquids. In 1994 he started Mountain Express, Inc. an independent contractor for Airborne Express, Inc.(later DHL)  providing pick up and delivery of freight and warehouse operation.

Joe was diagnosed with Stage 4 Small Cell lung Cancer in early December, and was advised at that time that there was no cure. During treatment he made peace with the Lord and was willing to accept what the Lord had planned.

A visitation will be held on Thursday, November 3, 2022 at 10 am with Funeral Services to follow at 11 am at Kingwood United Methodist Church. Burial will follow at 1:45 pm at Houston National Cemetery.

A visitation will be held on Thursday, November 3, 2022 at 10 am with Funeral Services to follow at 11 am at Kingwood United Methodist Church. Burial will follow at 1:45 pm at Houston National Cemetery.

Angel and I are just so very sorry for this loss of such a wonderful man … for his five sons and all his grandchildren…. especially his wife Helen 60 incredible years of marriage he will be truly missed by the community

Ill Sir Joe Z and Lady Helen were a large part of our Shrine Family and became a very important part of our personnel Family . We have traveled many roads and crossed many bridges .They were very instrumental in assisting our family and helping our daughter start her own family . We are forever grateful for many things they taught and helped us with .

We were saddened to hear of the passing of Mr. Zettlemoyer. Though it has been many years since I saw he or Mrs. Zettlemoyer I was lucky enough to reconnect with Kevin at a local neighborhood event. I have many great memories from times I spent with your family growing up. Your dad was a great man and I am thankful for the time I got to spend with you all. Our thoughts and prayers are with your family at this time. Take comfort in knowing that his memory will live on forever.
Tom Little and family.