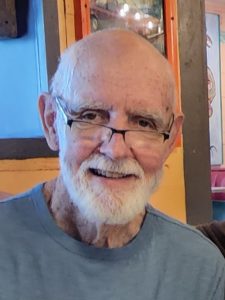 We are sad to announce the death of John Laws III at age 82 after battling Alzheimer’s.  He passed away peacefully on October 31st in Kingwood Texas.  John was a loving husband, married to wife Nancy for almost 58 years, and wonderful father to Joanna and Randy.  He was preceded in death by his mother, Margaret: father, John: sister, Sara; step-mother, Kathleen and step-sister Beth.

John was born in Morehead City, NC on February 6, 1940 to John II and Margaret Laws.  He grew up in Kinston and was a natural athlete. Lettering in baseball, football and basketball, and was a loving brother to sister Sara.  John served in the Army, stationed overseas during peace time, and was assigned to the USAR Control Group as a morse code interceptor.  He was a starter on the Armed Forces basketball team, and played teams throughout Europe, winning the Championships in 1963 and 1964.   The most memorable part of his time overseas was meeting his wife Nancy, who was working as a GS librarian on base.  They were engaged after four weeks.

John went on to graduate from the University of North Carolina with a degree in history.  He played on the freshman basketball team the year they hired a new freshman coach by the name of Dean Smith.  After graduation, he went straight to graduate school, where early on he happened to meet a recruiter from Esso Oil Company (later to become Exxon) who was on campus.  To the surprise of his pregnant wife, he decided to accept their offer of a marketing position, and he would go on to have a very successful 32-year career.

John’s work life took the family to cities throughout the south and southeast. He worked in Training, Safety, Compensation, HR and Annuitant Affairs.  While balancing home and work life, John practiced karate, played tennis, and enjoyed jogging on Kingwood’s greenbelt trails. For over 50 years he was an active member of the International Brotherhood of Magicians.  He continued honing his magic skills, volunteering in the community.  He especially loved performing at several area hospitals, especially pediatric wards, and for the children he encountered during several mission trips to South America.  John loved music in many forms, from country, gospel and classical to opera and theater. He took his family on many wonderful vacations and loved to travel.  His last stop on the Exxon train was Houston in 1981 and he retired in 1999.

Retirement for many means R&R, but not for John.  He volunteered much of his free time, most notably at HAAM (Humble Area Associated Ministries) and as a lay reader and usher at First Presbyterian Church in Kingwood.  He was an active church member up until the pandemic in 2020 and the onset of Alzheimer’s.

Anyone who knew John, whether professionally, casually, through volunteer work or were a regular part of his life, was surely touched by the kindness, grace, loyalty, chivalry, tolerance and generosity he embodied.  He was a wonderful father, husband, and friend to so many. The world is a better place because he was in it.

A memorial service will be held at the First Presbyterian Church in Kingwood at 1pm on Thursday November 17th.  In lieu of flowers, we invite you to donate to the Alzheimer’s Association or Humble Area Assistance Ministries.

John was a wonderful human being, a very kind , loving , sweet person! He will be surly missed by everyone who was blessed to have know him.
Rest In Peace !
Tony and Christine Codoluto

Dear Joanna and family, I remember meeting John when I and a group of friends went to Houston for a birthday celebration. Your parents graciously hosted us and we all camped out in your childhood bedroom. I remember there were magic tricks and dad jokes but mostly I remember seeing a family that really loves and cares for one another. So very sorry for your loss.