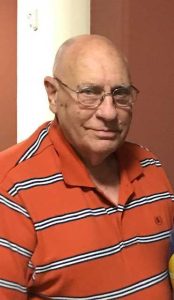 Joe was born on December 24, 1930 in Oklahoma to Helen Woodward Veatch and Walter Veatch. He was the youngest sibling of John Franklin Veatch and Margaret Helen Veatch.

Joe is survived by the love of his life and devoted wife of 71 years, Beth Morrow Veatch, and his children; daughter Debbie Veatch Roesler and her husband Ron, and son Greg Veatch and his wife Laura.

Joe grew up in rural Oklahoma, but due to the devastating effects of The Great Depression, his family sold their property and moved to a forty-acre farm in Russellville, Arkansas. Necessities were scarce and comforts were few. The home had no electricity, no running water, or no modern 1930s amenities. Joe, Margaret, and John entertained themselves through roaming the countryside, playing childhood games, and performing daily chores.

After tragically losing his mother to cancer when Joe was very young, he was fortunate to have a loving father, caring siblings, and supportive friends and extended family. Joe remained close to many of those family members and friends throughout his long life.

Joe’s father and siblings moved to Pasadena, Texas when Joe was in middle school.

Joe graduated from Pasadena High School in 1948, and during that time he had a paper route working for the Houston Chronicle. Shortly after graduation, he began studies at the University of Houston and met the beautiful Beth Aline Morrow at a party. They married on August 10, 1951 before Joe was drafted into the United States Army during the Korean Conflict. He went to basic training at Fort Lee, Virginia then was stationed in Zweibrucken, Germany for 18 months. Joe and Beth anxiously waited for his return and were only able to communicate through daily letter writing, telegraphs, and occasional overseas phone calls.

After completion of his service in the U.S. Army, Joe returned to his position at Burroughs Adding Machine Company in Houston as a repairman. Joe worked at Champion Paper Mill in Pasadena until the early 70s. While at Champion, Joe worked as a “cook’s helper” and later was fortunate enough to get into the apprentice program for instrumentation. Joe retired from the Celanese Corporation in 1993 after a satisfying and successful career in industrial instrumentation. He gained the respect and enjoyed the friendships of many he met during this time.

Notably, Joe was initiated into the Masonic Lodge in 1961 and raised to the degree of Master Mason in 1962. Joe was an active member of the Lodge during his retirement, and he received his 50 year service award in 2011.

Joe and Beth enjoyed their home in Pasadena where they raised their family, visited with friends, and hosted countless holiday celebrations. They relocated to Kingwood in 1997 and enjoyed getting to know their new community and neighbors. No matter where they lived, Joe and Beth provided a warm and loving environment for all who entered. Visitors were always welcomed with a good word and a fresh cup of coffee.

In his free time, Joe never shied away from a project. Whether it was woodworking, appliance repair, or mechanics, no job was too large or too small to help. Ever the go-to-guy, Joe could always be counted on to fix a broken clock, build a piece of furniture or simply have a pocket knife on hand.

Joe also loved to visit Oklahoma and Kansas to see dear family members and honor those who have passed on.

An immensely important foundation of Joe’s life was his faith. Joe began most days by reading his Bible and committing scriptures to memory. One of his favorite verses is found in Psalm 121: “I lift up my eyes to the hills. From where does my help come? My help comes from the Lord, who made heaven and earth.” Faith, worship, Bible study and active membership at Kingwood First Baptist Church were foundational for Joe and his family and we celebrate that he is now with his parents, his brother John and many special loved ones.

We have peace in the confidence that Joe is at this very moment experiencing the magnificence of God… and probably fixing whatever is broken.

Joe was a funny, terrific man.. I know he and Mike’s Uncle Paul Tidwell had lots of good laughs together, and Pop (Larry Tidwell) and their sister, Lois, always enjoyed their time together. I’m sure they are having a lot of rejoicing in heaven, but, I’m sure you all will miss him..know he’s earned his angel wings, and was one of the best guys around

Debbie and family
I am so sorry for your loss. I will be praying for you during this time. May God be your refuge and strength

Mr. Veatch was my neighbor in Pasadena for several years. Wonderful neighbors and kind friends. I’ve moved to Arlington Tennessee now so not able to attend his service but my prayers are with his family and friends. Mary Beth Swanson

I worked with Joe at Celanese. He was a terrific man, always smiling and kind. Happy to have known such a great guy.

So sorry for your loss – Another Celanese Good Guy gone. Always loved being around Joe & RIP

I worked with Joe at Celanese as well. Fond memories! Our condolences to the entire Family.

I worked with Joe in the instrument shop from 1974 to 1981 where I transferred to plant eng. and retired in 2000. My wife and I are currently in Lottsvburg, Virginia aboard our Pearson 530 sailboat. Joe talked about old world craftsmanship dying with today’s young. I miss those talks. Joe was the best the world had to offer.

I’m so sorry for your loss.
It’s been a long long time since the days at Celanese . Prayers for you snd sll your family. Ginger Hall

Dear Beth , sending my condolence to you and your family . It’s been a long long time since our days at Celanese .
Prayers for you during this difficult Heartbreaking time.
Ginger Hall