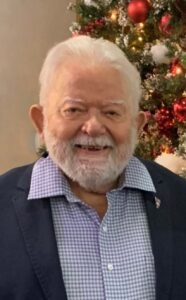 James (Jim) Edward Ward, born on August 23, 1936 in Selma, Alabama, entered rest, surrounded by family, on November 10, 2022 at the age of 86 years old. He is preceded in death by his parents; Thomas Bryant and Winnie Mae Ward; brothers David, Tommy, and Aubrey Ward; and granddaughter Tyler Raeh Ward.

Jim is survived by his loving and devoted wife of 66 years, Deanna June Ward, and their five children and families: Jamie Ward Jr. and wife Jennifer, Becky and Barry Childers, Candy and David Zachary, Ricky Ward, Jeff and Rhonda Ward. Survived by his brother, Billy Ward and wife Darlene; many nieces and nephews, numerous other family members and a host of loving friends.

We could never limit to one simple anecdote when it comes to James Edward Ward, our beloved Dad and Granddaddy. He was a romantic and an idealist at heart. A man who wanted to see the world and to live life to its fullest.

Jim joined the Army National Guard at 16 and transferred to the United States Air Force two years later at the age of 18. During his time with the USAF, he served during several conflicts (the end of the Korean War, Cuban Missile Crisis, Vietnam War, etc.). He served honorably in the USAF and retired after 23 years, achieving the rank of Senior Master Sergeant with the 68th AMMS Strategic Air Command. He continued his civilian career with Xerox Corporation and ultimately, in the oil and gas transportation industry.

Jimmy was known for helping others and was recognized by the American Red Cross for his volunteering efforts during Tropical Storm Alison. At the age of 47, Jim joined the Catholic church and became an active member of the Knights of Columbus where he achieved the level of 4th degree Knight serving his community through time, talent and tidings. He was the first recipient of The Shining Armor Award. He was actively involved at the church and chaired the stewardship committee and other ministries, as well as documented the history of St. Mary Magdalene Catholic Church’s 100th anniversary event.

Jim adored his large family and was most fulfilled in his role as husband, father and granddaddy. His dog, JJ, his faithful companion, never left his side. He was everybody’s biggest cheerleader, so proud of everyone’s accomplishments and enjoyed spending time with family. He always remembered birthdays and would let you know it by saying “And mannnnnnyyyy mooooreeeee”. He loved to cook and is known for his world-famous brisket, winning 2nd place at the Houston Livestock Show in 1994. He was an avid golfer (with three hole-in-ones in his lifetime). He loved fishing, hunting, bowling, softball (served as Head Coach of the USAF men’s fast -pitch softball team), Auburn football and especially the Houston Astros. He was a friend to everyone he met. He will be greatly missed by all those who knew and loved him.

The family would like to express their deepest gratitude for the loving care provided to him in the last few weeks of his life at HCA Houston Healthcare Kingwood and Medical Center hospitals.

A funeral Mass will be held at St. Mary Magdalene Catholic Church on Friday, November 18, 2022 at 11 a.m. with a reception to follow at McGiveny Hall.

Our prayers and condolences to the family.He is now with our Good Lord and Savior be blessed.
Andy and Bernie Vivian and Stella

It was our honor and privilege to care for Mr. Ward at HCA Medical Center. All our prayers to you.

Dear Deanna,
Bill and I express our deepest sympathies to you and family. Please know that our thoughts and prayers are with you and your family .

May your days be filled with of wonderful memories left behind of Mr. Ward. Blessings and comfort to all the family and friends.

Deanna, our heartfelt sympathy goes out to you and your children and all the family. Jim was a special man; I use to enjoy working with him at church. He will be missed by all who knew him. May his soul rest in peace now. Our prayers are with all of you.

Oh, how I wish I could be there to hug everyone during this time. Uncle Jimmy will be deeply missed. Love you, Aunt Deanna and the rest of the fam!

James lived many years and made many friends. He is now at Peace – Ecclesiastes 9:5 & 10.

Dear Becky. I’m praying without ceasing. Such a blessing to have a father who loved you so much.