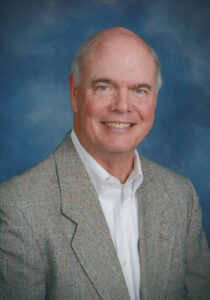 James Bryant Jackson passed away peacefully in his sleep on January 15, 2023.

Jim was born September 4, 1944, in Oak Ridge, Tennessee. He graduated from Georgia Institute of Technology with a Masters Degree in Civil Engineering where he met the love of his life and soulmate, Sharon Woodward. They married in 1967 and started their journey in New Orleans where Jim began his career with Humble Oil. In 1971 they moved to Texas where Jim was instrumental in the planning and development of Kingwood. As one of the community’s original families, Jim and Sharon built a life centered around their family, building memories and traditions that their grandchildren still enjoy today.

Jim took great pride in his 42-year career at ExxonMobil, from which he retired in 2009 as the Senior Asset Portfolio Manager, Americas, Global Real Estate and Facilities. But for all his professional accomplishments, Jim will be most remembered for the devotion, strength and love he gave to his wife, children and grandchildren.

Jim’s life defined great character. He was totally honest and without pretense. And his love for his wife Sharon was complete and unwavering.  Every Friday for over fifty-five years, Jim “surprised” Sharon with roses.

Jim was a selfless man who always put others’ needs before his own. He was the first one to volunteer for his children’s school activities and sporting events. When not volunteering, Jim and Sharon could be found in the stands cheering their children – then their grandchildren – on to victory.

Jim is preceded in death by his father, Leroy H. Jackson; his mother, Rita Bryant Jackson; and his sister, Patsy Lee Jackson.

A memorial service will be held on Monday, the 23rd of January at eleven o’clock in the morning at Good Shepherd Episcopal Church of Kingwood, 2929 Woodland Hills Drive.

In lieu of flowers the family would be honored with memorials made in Jim’s name to Tunnel to Towers, St. Jude Children’s Hospital, or the American Heart Association.

We send our deepest and most sincere condolences to the Jackson family at this very difficult time. What a beautiful life well lived! Loving thoughts and prayers, Pam & Jim Cann

Always in my heart.
Kathy Arthur

Sharon & Family. So very sorry for your loss. Jim was and is a great person. While he may not be here in person to hear your stories, laugh at you jokes, share your tears rest assured he is still with you now and will be forever
As long as you remember, he will live on and be at your side.
I can honestly say that Jim was BY FAR, the very best brother-in-law I have ever had. (As Sharon will tell you – he is the only b-i-l I have ever had but I am quite certain if that were not the case he would still be the best.

To Jim, Till we meet again – “Fair winds and following seas.” To Sharon, the children and grandchildren, – “Close to your hearts he will stay loved and remembered every day, and in the presence of God will help protect and show you the way. God Bless and keep you all – forever. ”
Love Charlie

We send our deepest sympathy for your loss! Jim was one of the finest gentlemen we have ever known…a wonderful husband, father, grandfather, and friend. While he is in a better place, he will be terribly missed! Take comfort in the wonderful memories of your good times together. You are in our thoughts and prayers. Please know that we will always be here for you!

So sorry for your loss family of James. He was a good man and left beautiful memories. May he rest for a short time. God is love – Job 14: 13-15