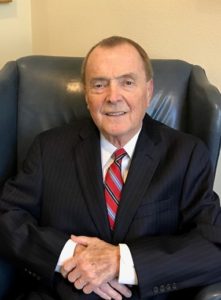 Glenn G. McMillen, of The Woodlands, TX, passed away on December 22, 2022, at the age of 80. He was born in DuBois, PA, to Glenn O. and Rebecca Hartman McMillen. Glenn had an incredibly rich and varied life, …always ready for the next challenge and adventure.

Glenn was a graduate of Punxsutawney High School, Indiana University of Pennsylvania, and Pittsburgh Institute of Mortuary Science. During his more than 55 years in Funeral Service, Glenn served in various senior executive positions with various companies and professional organizations. He served as President of the Pennsylvania Funeral Directors Association and later served as President of the National Funeral Directors Association. He was the Vice-President of the Fred F. Groff Funeral Home in Lancaster, PA before joining Service Corporation International and becoming Senior Vice-President of Operations and served as Chairman and CEO of SCI Australia. Glenn was also instrumental in the development of the American Funeral Service Museum in Houston, TX, and served as its first President.

Glenn never considered himself retired, but was constantly thinking of new ventures, leading when he could and mentoring many funeral service personnel who sought out his counsel. His contributions to Funeral Service are many and varied. He will be remembered and greatly missed.

My sincere condolences Peggy. As you know,Glenn was one of my best friends in high school. I was really looking forward, as Nance said he was to, to next summer’s reunion.

My sincere sympathy to Glenn’s family. Glenn and I are both W. PA natives and PIMS alumni. We worked on the same floor at SCI headquarters for a period of time back in the 80s. He was a fine gentlemen and will be fondly remembered. May he rest in God’s peace.
Paul White
Sarasota, FL