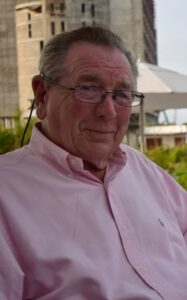 Gary Edward Battenberg was born on January 28, 1945 in Joplin, Missouri to Jacob Townsend II (JT) and Jowilla Jean Battenberg. He was a resident of Kingwood, Texas at the time of his death.
Gary is survived by his beloved wife, Judy; sons Jeffrey Todd Battenberg (and wife Renee’) and James Michael Battenberg (and wife Laura); step-sons Bryan Edward Starkey (and wife, Marilyn) and Bradley Wayne Starkey; brother JT Battenberg, III (and wife Luann); sister Karan Garrison (and husband Gregg); sister Darla Battenberg; grandchildren Kristie Schonfield, Allyson Hemby, Haley Hardin ( and husband Jake), Austin Starkey, Skye Battenberg (and wife Katia), Chance Battenberg, and Gavin Starkey; great-grandsons Hayden Schonfield and Sterling Battenberg; numerous beloved nieces, nephews, great-nieces & great-nephews . . . and his beloved Layla – the Shih Tzu princess – his baby girl. He is preceded in death by his father Jacob Townsend Battenberg, II; mother Jowilla Jean Battenberg Staples; brother R. Kevan Staples; step-father Crawford Staples; and father-in-law Oscar Russell Smith, Sr.
Gary graduated from Raytown High School in 1962. He then continued his education at General Motors Institute as an Industrial Engineer through the completion of his Bachelor of Science at Loyola University of Chicago – followed by some post graduate work at the University of Chicago.
Gary’s professional career in the financial services industry began in 1971. Over the years he was a Director of Recruiting for a financial services firm, a wholesaler of a major mutual fund, a Senior Vice President of a broker/dealer, a Senior Vice President of a major mutual fund company for 17 years, a manager of other brokers, and a was a Financial Advisor with Royal Alliance since 1995 (recently inducted into their Masters Club for 25 years of service).   Gary published many articles for industry publications and served on the Board of Directors of the National Association of Investment Professionals (NAIP). In addition to being a Board Member, he served as Co-Chair on the NAIP’s Corporate Relations Committee.  He was a co-founder of a bank and served with distinction on their Board of Directors as an Advisory Director for 13 years.
Gary was an avid golfer – achieving 5 hole-in-ones over his career. He and Judy took five golfing trips to Scotland and one to Ireland and played many courses around the United States and Mexico. Gary was a charter member of Deerwood Country Club. He was involved in the founding of the Golfers Against Cancer Organization and continued to be heavily involved with the annual fund-raising events. He was very competitive and especially enjoyed when he and his son, Jeff, played together in tournaments. His passion and competitive spirit have generated many colorful golf stories. He was also a lover of music of all genres and had a great singing voice. The bag boys at Deerwood used to know when he pulled into the parking lot – because he would have the top down on his convertible with Andrea Bocelli blaring and him singing over it – hitting every note.
Gary lived with a passionate and vivacious spirit like no other and loved his family fiercely. He was a friend to so many, and had such a huge heart and spirit. He was one to speak his mind – had no time or patience for “beating around the bush” or for fake people. If you asked his opinion – be ready for an honest answer – not what you might be wanting to hear – no sugarcoating from him. Honesty, integrity and loyalty is what he looked for in the people that he surrounded himself with. More than anything else, he loved his family deeply and enjoyed time spent with them and time spent with his friends.

In lieu of flowers, memorial contributions may be made (via check or internet) to Arm Yourself With Confidence, Inc. (a 501c3 organization, whose mission is to arm children, teenage girls, and women with the confidence they need to be prepared for any situation in today’s world). https://donorbox.org/website-donations-191

To the Battenberg family:
On behalf of Deerwood Club, we would like to extend our heartfelt sympathy for the death of Gary. Our thoughts and prayers are with your entire family. Gary will truly be missed here at the club, and we will forever remember our first member. We thank you and your family for all of the great times and memories we have been able to create together. Please do not hesitate to contact us if there is anything we can do to help you during this difficult time.

Thank you so much for your kind words, Josie. You always brightened his day at the club.

My thoughts and prayers for the entire family for the loss of a remarkable guy. Gary handled my 401 K and I had known him for 35 years and had a lot of mutual friends. He loved his travel and golf and I loved that he was upfront and honest.
May the healing gifts of time and the timeless love of God carry you gently through the loss you are feeling now. Enjoy those special memories.

Thank you so much, Jimmie.

My thoughts and prayers are with your entire family. Played some memorable rounds of golf with “Batman”. He will be missed.

Thank you for your kind words. He is playing a round as often as he chooses now!

Judy I was so sorry and shocked to hear about Gary passing away. My heart breaks for you and you are in my prayers. I’m thinking back and I have known Gary for almost 40 years.

Judy, I am so sorry to learn about Gary’s passing away. Please accept my deepest sympathy.