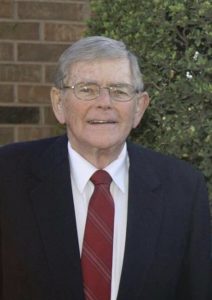 Kenneth Temple Etheridge, 81, of Houston, TX and formerly a resident of Kingwood for over 3 decades, passed peacefully into the arms of the Lord on December 31, 2018 at the Methodist Hospital in Houston.  He was born in the Corine Community in Cherokee County, TX on January 21, 1937 to Mildred Temple Etheridge and Floyd Taft Etheridge.  He lived and grew up in the Reese Community and graduated from Jacksonville High School in 1956.  After high school he enrolled in the Petroleum Engineering program at Texas Tech in Lubbock, TX where he became the first in his family to earn a Bachelor of Science degree.  After graduation he went to work for the Humble Oil & Refining Company (which later became Exxon) in the position of Senior Engineer that he held for 30 years before retiring.  It was a profession he was dedicated to, and he was committed to a life of excellence in everything he did.  After his retirement he became an avid freshwater fisherman, and he competed in professional bass tournaments in east Texas, Louisiana, and Oklahoma in which he was often the declared winner, despite everyone else’s best efforts to deny him being the victorious “champeen-of-the-world” that he always was.  He often said he fished for fun, and it didn’t matter to him whether or not he caught anything, he was often just happy tinkering with his reels and his bass boat, and he welcomed any excuse he could ever find to partake in the joy of that treasured endeavor.  It never took much arm-twisting to get him to go.

When Kenneth was a small child he was stricken with a terrible disease called polio, which caused him partial paralysis that affected him the rest of his life.  Despite his physical limitations he became an example of strength and resilience in the face of adversity.  It was a quality that is not often found these days anymore, and he became a leader because of his attitude to “NEVER give up” in spite of all of the odds being against you.  He instilled that ideal in his family, friends, co-workers, and basically every person he met.  Kenneth Etheridge never really met a stranger, and if you were a stranger, it wasn’t for long.  He was absolutely genuine with his family and friends.  He will be easy to remember and difficult to forget.  That is the way he would have wanted it.  We will always love him and he will never be forgotten.

Kenneth was preceded in death by his beloved older brother, Texas DPS Sergeant Floyd W. Etheridge, who died tragically in October 1969 in an accident that involved his state patrol car.  In April of 2014 he was able to see the memory and public service of his brother honored by the Texas Public Safety Commission and the Governor of Texas.  It served to heal a deep loss he carried most of his life, finally witnessing the recognition of his brother’s service and sacrifice to the people of Texas.  He remained grateful for the invitation by the Governor to witness the honor bestowed on his brother for the rest of his life.  He is also preceded in death by his beloved wife Barbara Jo Hanson Etheridge in August 1998, with whom he had two sons, Michael and Floyd.

He was a wonderful husband, father, and grandfather.  We know that he now dwells in the presence and perfect peace of his Lord in the realm of heaven, where sadness and suffering are no more.  He will be forever loved, dearly missed, and fondly remembered by all of us who were privileged to share our lives with him.