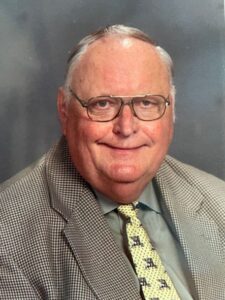 “…but they that wait upon the Lord will renew their strength.  They shall rise up with wings of eagles, they shall run and not grow weary, they shall walk and not faint.”  Isaiah 40:31

With great sadness, we announce the passing of a dear loving husband and father – Donald West Neal (our beloved Poppy/Grandad) on October 9, 2022 at the age of 87 years.  We are left with many wonderful memories and many future plans. Yet, that was not meant to be, as God is the Master Planner.  We are grateful that Don was loaned to us for so many years.

Don Neal was born on December 6, 1934 to parents Victor and Mary Kathryn Neal on a farm in Fayette County, Kentucky (near Lexington).  When Donnie was 5 years old, he began working on a farm with his father and later was joined by his siblings.  The eldest of 8 children, he worked hard all of his life.  After his family moved to Ohio, Don attended Burbank High School where he played basketball, played clarinet in the band, acted in the school plays, and excelled in academics. While attending Ohio State University, he held a variety of jobs, including the dairy science program and working at an aircraft factory, as well as completing the Air Force Reserve Officer Training Corps (ROTC).  Don graduated in 1956 with a degree in agriculture. He taught high school agriculture for one year prior to being commissioned as a 2nd Lieutenant in the Air Force. Later, he earned a masters in education and counseling at Baylor University and worked toward the War College Program.

Don had a variety of assignments in the Air Force including: Radar Operations Officer at North Bend, Coos Bay, Oregon; Navigator instructor at James Connally Air Force Base (AFB), Waco, Texas;  Public Affairs Officer at Webb AFB in Big Spring, Texas; Navigator on the AC-47 Gunship at Phu Cat Air Base in South Vietnam; Navigator at England AFB, Louisiana; Public Affairs Officer assigned to HQ USAF at the Pentagon; and Navigator on C-130s and Project Officer for the Commanding General at Dyess AFB, Abilene, Texas.  Lt Col Neal retired from the Air Force in 1985 after 28 + years of service.

While assigned to Dyess AFB, Lt Col Neal met Sophia Hiscock in Goose Bay, Labrador. They married on December 24, 1978. The marriage to Sophie produced a blended family of 10 kids.  Always an entrepreneur, he worked in a variety of business ventures including real estate, mutual funds, insurance, and other items such as Organo coffee and healthy products. He was an educator, a life long learner, and a mentor to many.

Don Neal was a kind, gentle and God-loving man. He volunteered in many capacities with the VFW, Chamber of Commerce and Churches in many communities.  He was active in the Downtown Houston Optimist Club.  Throughout his life, he enjoyed attending Base Chapel services, First United Methodist Church of Missouri City, reading the Bible and giving prayers at family gatherings.  Don passed away on October 9, 2022 after a four year courageous battle with acute myelogenous leukemia (AML)-related to agent orange exposure in Vietnam, and other health challenges.

Don left behind numerous cousins, nieces, nephews and other extended family, as well as dear friends.

The family appreciates all the medical staff who helped provide care over the last four years.  In lieu of flowers, a donation to the charity of your choice would be preferred.

My Sincere Sympathy to Sophie, Lindy and the Neal and Hiscock Family. I have many fond and loving memories of Don, both in Texas and Newfoundland . Thinking of you, God Bless ! Love, Jean

My condolences to the entire family of Mr. Don Neal. He always had a smile on his face that shined as bright as the stars. He will truly be missed.

Words can not express my heartbreak when I learned of the passing of this dear and gentle man. My condolences to his beautiful and dear wife Sophie and his entire family. May God bless and keep each of you is my prayer.

Sending our condolences to Aunt Sophie, Lindy and to the Neal and Hiscock families. We have fond memories of Don and hope that your memories give you some comfort during this difficult time.
Love, Linda and Ken

To Aunt Sophie, Lindy, Neal, and Hiscock families:
Extending condolences on your loss. We hold pleasant memories of moments shared together. Don’s positivity, kindness, and patience were exemplary.
Dora and Jun

We really enjoyed the lovely send off for Don! The stories were sweet, the music was lovely, and Mom’s poem was wonderful! We cried a little. Carey was so right when he said Don welcomed our big family and it was not always easy. lol. He was a good man. He was loved by all who were fortunate enough to know him. So good to see all of you and to hear you speak so fondly about this quiet, unassuming man. Harold and I are so thankful that we were able to visit with him in May. Enjoy your time together over these few days. xxoo from here to there from all of us to all of you.

The service for Don was beautiful. We are so thankful that we could see it. Our thoughts & prayers are with Sophie and the Neal & Hiscock families.When we visited Texas many years ago Don & Sophie took us all over Texas. Hugs. Sam & Dorothy Melendy.

Thinking of all the family, especially of my friends Sophie, Lindy, Carey and Slina.Don was a great and beloved man. I did not know so much of his awesome background until I read his obituary. My sympathy to his extended family and friends. Blessings to all.