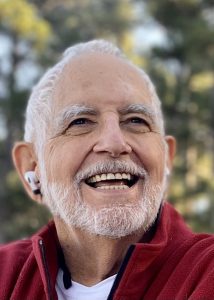 Donald Lane Howlett, aged 81, passed away October 8, 2022, in Kingwood, TX.  Don was born in 1940 in DeQueen, Arkansas where he remained throughout his formative years.  Don studied at Southern Arkansas University from 1958-1960 and obtained a degree in Electrical and Electronics Engineering from the University of Arkansas in 1962.

While in University, Don met his wife Sue and they married in Houston in 1963, where they settled and raised three children.  Out of University, Don took a job as an electrical engineer for Texaco in Exploration and Production Research where he remained for the rest of his career.  As an exploration geophysicist Don used his inventive and curious mind to push the leading edge of 3D seismic imaging.  After 37 years Don retired from Texaco and continued to work as a geophysics consultant throughout the remainder of his life.

Don had a passion for sailing, with a particular penchant for racing. He loved building and flying RC airplanes.  He loved the national parks, and the natural beauty of the earth.  He was a tinkerer, a woodworker, a mechanic, and an all-around DIY expert.  He loved his dogs and his cats as if they were his kids.  He cherished sitting under his covered patio and looking at his koi pond.  He will be remembered for his encyclopedic knowledge of seemingly everything, his long thoughtful pauses before answering a question, his kind and generous heart, and his devotion to his family.

Don was preceded in death by his parents, Harry and Gwendolyn, and his brother Harry Elmo. He is survived by his wife Sue, and his three children Cynthia, Laura (Bleier), and Eric, and grandchildren Austin and Amanda Bleier.  Private committal service in Horatio, AR. In lieu of flowers, memorial donations may be made to the American Kidney Fund (www.kindneyfund.org)