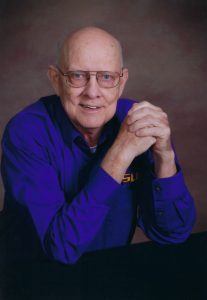 Dan grew up in Homer and Sunset, Louisiana. He joined the U.S. Navy and proudly served his country for 14 years. He was able to travel the world via multiple deployments and was a member of the commissioning crew of the USS John F. Kennedy CVA-67. Although they knew each other while growing up, it was during his service years that he married the love of his life, Eldora Thompson. While stationed in Virginia, Dan and Eldora would welcome their son, Daniel Lynn Taylor. After leaving the Navy he moved with his family to Luling, Louisiana to work for Occidental Chemical. Soon after, they would welcome their daughter, Danielle LaRae Taylor. During the subsequent years Dan would be an active member of First Baptist Church of Luling as an ordained deacon and usher. Following Hurricane Katrina, Dan and Eldora would move to Atascocita, Texas to be closer to their grandsons.

He would become a member of Woodridge Baptist Church in Kingwood, Texas volunteering as an usher and member of the military ministry. He would meet on Thursday mornings at a local IHOP or Denny’s to commune with other local Vietnam veterans. At lunch on Fridays he would get together with the Woodridge “Bored” group to solve the world’s problems.

The memorial service to celebrate his life will be held at Woodridge Baptist Church at 1:00 pm Saturday, March 19, 2022, with a visitation immediately preceding at 11:00 am. Internment will be at Hebron Baptist Church Cemetery, Summerfield, Louisiana.

In lieu of flowers, donations may be made to Samaritan’s Purse – US Disaster Relief or The American Heart Association.

Lynn – I am so sorry to hear of your dad’s death. You don’t know how many times I have thought of you and wondered what became of your life. I truly enjoyed teaching you Spanish. Fond memories.

Our deepest sympathy to the entire family. You are in our hearts at this challenging time. Please know the Howard Gardner Community School holds you in our thoughts and prayers. We love your daughter Danielle very much and we will take good care of her upon her return.
Love,
The HGCS Staff, Students, and Families

My very deepest sympathy to the family. May God give comfort to the family. I worked with Dan and car pooled with him for a number of years. Dan was a gentle and fair man. He was God fearing and a good man. R. I. P. ole friend.