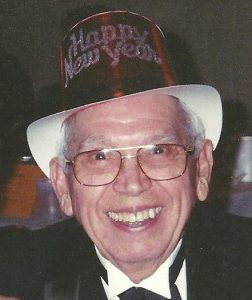 Armando Mares, a proud veteran and beloved husband, father, grandfather, great grandfather, brother, uncle and friend, passed away peacefully at the age of 96 on July 31, 2022 in his hometown – Houston, Texas.

He was welcomed by his parents Celia and Manuel Mares Sr. on February 22, 1926 at their home in Houston. He grew up with six siblings: Manual Mares Jr., Maria de la Luz (Mary), Gilberto (Red), Raul (Roy), Ignacio, and Guadalupe (Lupe). During the depression Armando sold newspapers and shined shoes to help ends meet. During High School he loved to play basketball and football until he broke two ribs.

Armando joined the Navy in 1943. He served as a tail gunner, flying patrols in a torpedo bomber over the Gulf of Mexico and Atlantic Ocean. On August 18, 1944, his three man bomber crashed over the Atlantic. Although initially reported as deceased, he was the sole survivor. He suffered severe back injuries and paralyzed for eight months. With help from God, family, and friends he learned to walk again.

He returned to Houston and attended college knowing that an education was important. He had a career as a watchmaker before falling in love with Marguerite Hernandez, who he married in 1951. That same year the shop where Armando worked burned down and he moved on to a long career in the U.S. Post Office. Armando and Marguerite were together for 47 years raising three daughters: Glenda, Margaret and Theresa. They relocated to the Humble area in 1997 shortly before Marguerite’s passing. He later married Wanda Corner and they lived together in Atascocita until her passing in 2013. Armando then relocated to Arbor Terrace in Kingwood.  He always enjoyed traveling the U.S.A. and abroad with family and friends. He lived life to the fullest enjoying church, bowling, bingo, dominoes, dancing, swimming and happy hours.

Armando is survived by his two daughters, seven grandchildren, five great grandchildren, and his grand dogs. He was preceded in death by his parents, siblings, wives and daughter Glenda. He leaves behind many family and friends who loved him and will miss him dearly.

Margret and Theresa, my condolences to you and your family. Your dad will be remembered for who he was and for Mares family he represented. He served loved his country with pride and served proudly in the Navy. I am proud of him and his legacy will live on. He touch many lives and will be missed. He live a full and long life and now is with God. Amen

Thank you for your kind words.