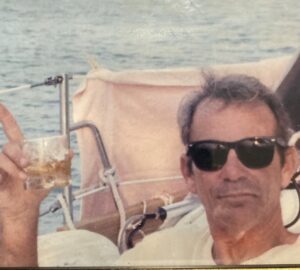 Al Simon was born on 11/13/41 in Abbeville, LA in Vermillion Parish, where he was the 4th of seven children.  He attended Mt. Carmel High School, and was widely considered a star athlete.  In 1959 he served as a fire control technician in the U.S. Navy, where he received a medal for good conduct aboard a pacific fleet aircraft carrier in Japan.

After the Navy, he started a family and a career in finance.  Al went on to own multiple auto dealerships, including Al Simon Chevrolet in Crosby, Texas, as well as, a stake in the Houston Rockets NBA franchise.  He enjoyed playing basketball, tennis, golf & scuba diving all over the world.

After retiring in 1999, Al spent several years sailing around the Gulf of Mexico, Caribbean & Atlantic Ocean – docking to make friends with the locals at various ports of call, however, his beloved yacht was taken by the sea during Hurricane Katrina.  His next adventure was heading west in an RV, up the west coast, through Canada, down the east coast, then back home to Texas.

Al enjoyed dancing, singing and playing the guitar.  He loved any good music, but his favorites included rock-n-roll, blues, R&B, country, soul & jazz.  Al had a passion for adventure, travel, sports, music & art, but he felt his family was his greatest accomplishment in his life.

On the morning of Sunday, 5/1/22, Al lost his 6-year battle with dementia with his wife by his side.

Al’s immediate family would like to extend their heartfelt thanks and sincere gratitude to his niece, Wanda Thompson, as well as, Dr. Sheila Loboprabhu & Dr. John Howard for the love and care they have provided.

In lieu of flowers, the family requests donations to:

The service will be live streamed on Al’s Facebook page

CLAUDIA SO SORRY FOR YOUR LOST I KNOW YOU WILL MISS AL. I WILL MISS THE EXCITEMENT IN HIS VOICE WHEN I SPOKE TO HIM. WE HAD SUCH GOOD AND BAD TIMES TOGETHER. I LOVED HIM ALWAYS REST IN PEACE AL I WILL MISS YOU. SAY HI TO MOM, GLORIA AND JIM FOR ME

Claudia & Brandon,
My deepest condolences on Al’s passing. My your years of blessed memories with Al lift you both up and bring you some comfort.
Fondly, Cheryl Koretzky ❤️

I was so sorry to hear of Al’s passing. I treasure the many words of wisdom that he bestowed upon me. He will always hold a special place in my heart. I greatly admired his deep love of his family. Take comfort in your many precious memories.
My thoughts and prayers are with you all.
Sylvia Scarborough