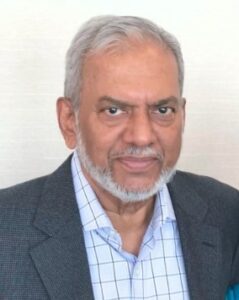 Mr. Abraham Thomas, affectionately known as Kunjumon, was born on March 18, 1948 to Mr. P.T. Thomas and Mrs. Aleyamma Thomas of Thumpamon Vadekkedathu Thayyil Puthenveettil. Even from a young age, he had a “larger than life” personality. He was active in school, church, drama, sports, and even some mischief as a youth. Everywhere he went from the time of his childhood to even his most recent days, he was able to attract family and friends alike. Because of his big heart and amazing generosity, he endeavored to make all of his “friends” a strong part of his greater family.

In December of 1970, after completing his M.Com at M.G. College in Trivandrum, he immigrated to the United States, arriving first in Ohio. He then moved to New Orleans, LA with his elder cousin and father-figure, Mr. George Thomas, where he studied for his Master in Accounting at Xavier University. On September 22, 1974, he married his beloved wife, Susan Abraham, and settled in Houston, Texas. Their marriage marked the first Malayalee Holy Liturgical Service conducted in the Indian Orthodox Church in Houston by the late Rev. Fr. Koshy P. John. Soon thereafter, the Indian Orthodox Church Community began to flourish in Houston under the leadership of the late Rev. Fr. Dr. C.O. Vargis. Despite his young age, Abraham had a drive to be a pioneer of Malayalee descent in this country. He became the first trustee and secretary of St. Thomas Indian Orthodox Church, and was instrumental in the formation of the North Shore Malayalee Sports Club, Kerala Cultural Association, and many other organizations that paved the way for Malayalees from South India to be able to find a “home” away from home in Houston.

He began his career as an accountant for Oshman’s Sporting Goods and later became an Assistant Controller for Leonard’s Department Store. Through the years, Abraham successfully ran various businesses, the last of which was Alamo Travels. More than making a comfortable living for his family, his business ventures were also his opportunity to network and serve his greater community. The primary focus of his businesses was not for profit, but it was for the people. He organized several group adventures and traveled around the world. Through his work, he was able to create life-long friendships and help countless people with no expectation of anything in return.

More than all of his achievements in his service to the community, he was a dedicated family man. He was married to the love of his life, Susan, for 48 years. He was a nurturing father to his children: Sherin and Rob Wesley, and Anish and Simi Abraham; and a loving grandfather to his five grandchildren: Isabel, Caleb, Ariana, Giana, and Luke. He led his family by his example: forgiving, serving, loving, and caring for others was his greatest motivation. As he got older, he faced many health challenges that weighed on him physically and mentally, but his faith never broke; instead, it only grew stronger. During his final years, he taught us the power of prayer, to have everlasting faith in Christ, and the importance of unity and reconciliation. He went above and beyond to mend relationships; not only in his family but in the community. He had a genuine desire to see the success of everyone around him and with tough love encouraged everyone the same. This was truly his legacy: to love God faithfully and to shine God’s love to everyone around him.