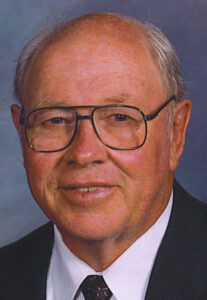 Oluf Braren was born in Bronx, NY, on Friday March 6, 1936 and passed away on Friday, December 17, 2021. The oldest of five children, he grew up in a large loving home where were laid the spiritual and intellectual foundation upon which his whole life was built.

He attended Rensselaer Polytechnic Institute in Troy, NY, where he played lacrosse and received his Chemical Engineering degree. Although he was offered a job in Houston, TX, he refused as he would not be close enough to return to his beloved family at 232 B Edgewater Park for holidays. He started his 40-year career with Goodyear Tire & Rubber Company in Akron, OH, and a year later was transferred to Beaumont, TX. He met his wife, Dottie, on a blind date for a Valentine’s Dance (thanks to the persistence of Bernice). They were married in July of 1963 and started their family life which eventually included 4 children: Fritz Oluf, Gretchen Ida, Eric Potter, and Heather Maria. These years included many return trips to Edgewater Park, New York to visit family, many days spent at the Beach Cabin in Bolivar, and the road trips that a family of 6 could enjoy in the family station wagon.

Years passed quickly with coaching soccer teams, baseball teams and attending as many (every) sporting events of his children. A move to Kingwood in 1983 came with a transfer to Goodyear Houston. Oluf completed his career at the Houston plant, making life-long friends.

Grandchildren and retirement coincided to bring him much joy. Being called Opa (German for Grandfather) was a title that was very endearing to him. Frequently, Opa was one of his grandchildren’s first words.

The other love of Oluf’s life was golf. In his retirement years, he was able to spend more time on the courses. This included (2) holes-in-one with the 2nd at the age of 83. The OFWW at Kingwood Country Club, the golf trips to Pearl River, MS, and traveling to other local golf courses allowed him to enjoy the game and good friends. Some of his best friends were made on the golf course.

He was a member of the Goodyear Retiree’s Club. He was able to attend the annual Retiree’s Christmas party December 8th where he was able to visit with his good friends made at Goodyear.

Through his years he has many accomplishments of which he is proud: Congregation President of the Bethlehem Lutheran, Charter member of Christ the King Lutheran Church in Kingwood, and he served 20 years with AARP Foundation Tax-Aide Program.

Oluf always provided sage advice whether it was how to fix something around the house, how to fix your car, how to save/invest your money, or how to complete your math homework across generations. He was devoted to his family and helping them in any way he could (painting walls and ceilings, moving, a little gas money, extra prayers, and anything else).

He died suddenly following a single vehicle car accident leaving behind a heartbroken family who will miss him dearly.

He is preceded in death by his Mother and Father, Irma and Fritz Braren, his sisters Ingrid Braren and Elsbet Wallace. He is survived by his wife, Dottie Braren, children Fritz Braren, Gretchen and husband Chad Abney, Eric Braren and wife Jennifer, and Heather and husband Dennis Cummins, and grandchildren Alex Abney and wife Kaitlyn, Ian Abney, Tess Abney, Morgan Braren, Amber Braren, Haden Braren, Oluf Cummins, and James Cummins. He is also survived by his brother Volkert Braren and wife Maureen, and sister Elka Deede and husband Peter. There are numerous nieces, nephews, great-nieces, and great-nephews that shared many family travel adventures, good laughs, and fond memories.

Services will be held on January 8, 2022, at 10 am at Christ the King Lutheran Church in Kingwood, TX.

One condolence on “Oluf Braren”

I worked with Oluf for many years at Goodyear Rubber Plant in Houston Tx. He was a very upstanding person to know. So very sorry to hear he passed away. May Jesus lift him up to His Glory. We are all blessed with the gift of memories from our Lord and Savior.
Prayers for Oluf and Family.
Don and Annette Wake