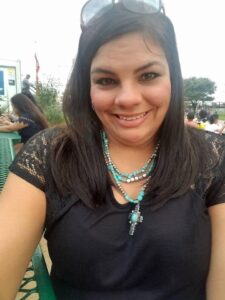 Brandi went peacefully to heaven on Saturday, November 27, 2021 at the young age of 38. She was born to Anthony and Brenda Hesse. She was born on January 8, 1983 in Houston, Texas, Brandi lived her entire life in and around the city of Houston. She graduated from Channelview high school in 2001.

After doing various jobs, she started in the auto transport industry and loved to drive various vehicles and meet different people. In 2013, Brandi was diagnosed with synovial sarcoma, a rare and aggressive cancer. Soon after, she met the love of her life, Steve Henry, and was married. Brandi was a devoted wife and mother to her two children, Cameron and Chloe.

Her smile and laughter was infectious. Her charismatic and outgoing personality made everyone fall in love with her. She had the strength and tenacity of ten grown men and never gave up the fight for her family and friends.

She is survived by her husband Steve Henry and children Cameron and Chloe. She is also survived by her mother, Brenda Hesse, her step-mother Cathy Hesse, sister Brianna Hesse, brothers, Brandon Hesse, Brian Aranda, John and Paul Howland, and step-brothers, Derek and Ryan Scott. Along with many extended family and friends.

She was preceded in death by her father Anthony Hesse, Grandparents Jerry and Jorene Wells, Polly Hesse, Billy Joe and Dolores McFarland.

A visitation will be held on Saturday, December 4, 2021 from 12pm until 2pm with a funeral service to follow at 2 pm at Darst Funeral Home.

You are loved and missed dearly sister!!

Brandi Nicole Hesse Henry…. I love and miss you soooo much. We ALL do. YOU MATTER so much to so many. Life won’t be the same without you. Fly high knowing you made a difference and you are special and LOVED!!!!! So proud to call you my friend.
Love you bestie!
Angie

I’m so so sorry to hear of Brandi’s passing. She was such a wonderful friend to me. We shared alot of encouraging words together. She was my cheerleader and I was hers. I will see you again someday sweet friend. I will cherish our friendship and remember our conversations forever. You were such a light and always happy. Love you Brandi. 🤗💗
I will be praying for your family and for your sweet kids. Sending all my love and lots of hugs to your family!!💗✝️🙏🏻