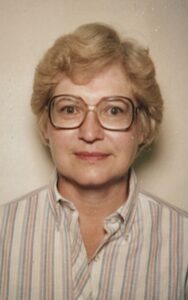 Esther Reid Crosby, age 86, passed away peacefully on December 7, 2020, in Atascocita, Texas, after a years-long battle with Parkinson’s disease and later Parkinson’s-related dementia. She is survived by her daughter Jennifer Crosby of Anchorage, Alaska; son John Crosby/son-in-law Cole Wolford of Fort Lauderdale, Florida; sister Georgine Neureiter of Arlington, Virginia; and nephews Paul Neureiter, Reid Neureiter, Kirk Neureiter, and niece Tara Goss, along with their spouses and families. Esther, known affectionately by many as “Birdie,” was predeceased by her husband Richard Evans (“Dick”) Crosby.

Esther was born in 1934 in Philadelphia, Pennsylvania, to James and Esther Reid. She graduated with a Bachelor of Science degree in Education in 1956 from the College of Home Economics at the University of Maryland at College Park, where she served as President of the Maryland Beta chapter of the Pi Beta Phi sorority. In the years following graduation, she undertook a series of adventures including a stint working behind the scenes on an early TV cooking show, a cross-country road trip that resulted in a teaching job in Boone, Colorado, graduate school coursework at the University of Wisconsin at Madison, and her first of several Atlantic crossings to visit her Irish cousins and her sister Georgine, who was living in Munich at the time. Eventually, she settled into her career as a teacher and guidance counselor in the Maryland and later New Jersey public school systems.

She married Richard “Dick” Crosby on August 26, 1961, and became the most loving of mothers to Jen and John several years thereafter. Her devotion to the game of golf – which started with wooden clubs made for her at the age of three and led to a seven handicap at the age of 16 – continued throughout her life until physical limitations prevented her from playing; even then, she later shared that she would lull herself to sleep by playing her home course from her childhood – at the Tully-Secane Country Club, near Philadelphia – in her mind. Esther was also a devoted, life-long Presbyterian, who served as an elder, deacon, and delegate to the Presbyterian Church (U.S.A.) General Assembly. She was a founding member of and active volunteer at the Atascocita Presbyterian Church. Both from inside and outside the church, she spent her later years actively pushing for social change, whether through stronger gun control laws, anti-human trafficking initiatives, or efforts to increase the civility of societal and governmental discourse. She worked hard to build bridges, driven by compassion. At her core, though, Esther’s greatest devotion was to her children, and she continued to exhibit her strong will and protective spirit until the very end, with moments of her signature wry wit and her love of laughter managing to shine through the haze of a cruel and debilitating disease.

A memorial service, delayed for a year by pandemic-related concerns, will be held on Saturday, December 4, 2021, at 11:00 am at the Atascocita Presbyterian Church, 19426 Atasca Oaks Drive, Atascocita, Texas 77346. For those unable to attend in person, the service will be livestreamed at https://boxcast.tv/view/esther-crosby-memorial-service-514587 or via the church website (apchumble.org). In lieu of flowers, Esther asked that donations be made in her memory to the Institute for Civility in Government (instituteforcivility.org). Her family would also welcome donations in her memory to the Facilities Capital Maintenance Fund at the Atascocita Presbyterian Church (checks payable to the Atascocita Presbyterian Church at the address above, with a notation “Esther Crosby Memorial”) or to any local Parkinson’s or hunger relief charity.

A memorial service, delayed for a year by pandemic-related concerns, will be held on Saturday, December 4, 2021, at 11:00 am at the Atascocita Presbyterian Church, 19426 Atasca Oaks Drive, Atascocita, Texas 77346.