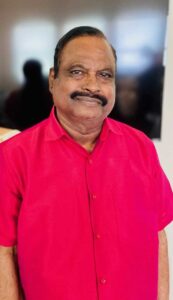 Thankachan Lukose was born on March 24, 1945 in Ampalakara, Kerala (India) to the late Mr. Mathai Lukose and Mrs. Rahelamma. He was the youngest of 6 siblings.

Thankachan was a scholar from a young age as he enjoyed reading, learning about various subjects and had a general curiosity about the world around him. This interest and passion for learning followed him well into adulthood serving as his inspiration for all he would accomplish and the person he would become. Along with his interest in learning, he demonstrated persistence, determination, and dedication in all aspects of his life, which helped him set and achieve his lofty goals despite many obstacles.

He married the love of his life, Annamma Geevarghese, on August 20, 1981.  The two of them lived an exemplary life of sacrificial love and set the best example possible of what marriage should be. They were blessed with 2 sons, Jibin and Sibin. They moved to the United States in order to provide their children with better opportunities. Thankachan and Annamma worked together to raise their children in a foreign country while ensuring that they imparted strong values and wisdom to them. He demonstrated the meaning of true love in how he treated his wife and children. He demonstrated a Christlike sacrificial love daily as he put their needs above his own without question or complaint. Thankachan was blessed to watch his family grow with the addition of his daughter-in-laws, Sheba and Amy, whom he loved as his own. Thankachan was blessed in so many ways, but his biggest blessings were his 2 precious grandchildren, Ethan and Leah. Though they were only a part of his life for a few short years, the love he showed them will last a lifetime.

To many, Thankachan was a man of few words, but those that knew him well will deeply miss his (witty) sense of humor, thoughtful nature, work-ethic, detailed story-telling, motivational speeches about the importance of hard work, and his loving nature. By nature, he was the person in the background taking actions to help his loved ones and people in need without asking for recognition for his numerous good deeds. His absence will be felt forever, but his presence in our lives will never be forgotten. The legacy that he has left will impact generations to come.