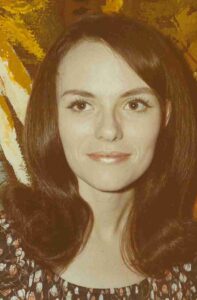 Beth was known all her life as Elvis’ number 1 fan, having lived around the corner from him in Germany after WWII. Her family settled in Texas when her father retired from active duty, while stationed at Ft. Hood. Her father and his best friend founded the Southwest Bell County Fire Department, located in Ding Dong, Texas. Beth would support this group for the rest of her life. Beth became an Austinite soon after high school, and Austin remained her favorite place in the world. She worked in State Government most of her working life but also made life-long friends in the entertainment business, working in local hospitality industry in 1970’s Austin. She worked in hotel management at the original Hilton Hotel, where she also did some modeling for their promotional items.

Beth was a fiercely loyal mother, grandmother, and friend. She is preceded in death by her daughter, Elizabeth Christine Bullion, a brother, Charles Cooper and her parents, Charlie G. and Mildred “Midge” Cooper and a Son-in-law, Don Tunstall. She is survived by her daughter, Anna Tunstall; Grandsons: Reese Burgan and his wife Britney, Jacob Tunstall and Isaac Tunstall and his fiance’ Eady Busbice; and a great-grandson, Caleb Michael Burgan, and her brother, Matt Cooper.

In lieu of flowers, please donate in her name, online to the Southwest Bell County Fire Department at: swbcvfd.org -or- by check at 258 Triple 7 Trl., Ding Dong, TX 76542.

Anna, I am so glad I got to meet your mom! You loved and cared for her well! She was a beautiful lady and you look just like her !! I will continue to pray for you and your family as you adjust to her passing. Love you !!

Dear Anna: As you know I had never met your sweet Mom until 8/17/77 at Jim’s place in Memphis and in the midst of our sorrow during that week became friends for the remainder of her life. I will never forget her and have missed getting to talk to her for the past several months. Will miss that until I join her in that heavenly choir singing praises to our Lord with EP leading us. Hopefully she and I will be on the front row for some of that. I will continue to remember you and the boys in my prayers asking for your comfort and peace. I just wish I could do something to help you through this difficult time. I will keep in touch with you periodically until unable to do so. Much love to you.

Truly on of a kind. Very caring person and loyal friend. I’m going to miss her.