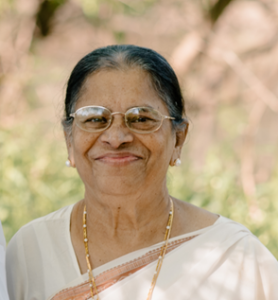 Rachelamma Samuel was born on February 2, 1942 to Cherian Geevarghese and Kunjamma Geevarghese from Kottackakathu Peedikayil, Parimanam, Muttom. She was baptized in the Mar Thoma Church in Punthala.  Lilly, as she was lovingly referred to, was the second of three daughters.

She passed high school in Muttom, and then went on to do her clinical training at Mayo Memorial Hospital in Nagpur, graduating with a Nursing diploma in 1964. Lilly joined Kasturba Hospital, Heavy Electricals Ltd., in Bhopal as a staff nurse.  And, on Feb 3, 1965, she married Baby Mathai Samuel and was blessed with three children, Shani, Reno and Sano.

In January of 1973, she emigrated to the U.S., and began working as a nurse in Philadelphia, PA. She passed her RN license and completed her Associate’s degree from Philadelphia Community College. Lilly worked at the Hospital of the University of Pennsylvania for 25 years in the NICU. She was an active member of both the Philadelphia Mar Thoma Church and the Bethel Mar Thoma Church for many years.

After retiring, she moved to Raleigh, NC in 2003, where she and her husband were founding members of the North Carolina Mar Thoma Church. She participated in the Sevika Sangham and church choir. She devoted her life to daily prayer, meditation, and singing. She became passionate about singing Christian devotionals. In 2007, she wrote and composed Malayalam devotionals, which were recorded into a CD entitled “En Athmageetham”.

In 2018, she and her husband moved to Missouri City, Texas and became a member of the Immanuel Mar Thoma Church.

We want to express our heartfelt thanks for your prayers, love and
kindness during our time of sorrow and bereavement. Your presence
with us during this difficult time will not be forgotten.

Our heartfelt condolences Praying for the departed soul and grieving family

Our condolences. Praying for the bereaved family especially Babychayan. Let Lillykuttyammamma’s memory be eternal. With prayers Grace and Joy

Our beloved Valyamummy Rachelamma Samuel is one of the nicest person that I and my brother Aji have ever known. We had plenty of loving memories of her. We thank God almighty for giving us such a lovely mother and wonderful family. This is a sad moment for us. This loss is very painful. In this difficult time, me and my brother Aji sending our deepest sympathies to our beloved Valyapappa Baby M. Samuel, Shanimamma, Renochayan, Sanochayan & all dear and near ones in our family. I hope we will always remember her words, prayer & faith and abide by those. I hope God blesses and comforts dear Valyapappa and family and takes the deceased’s soul to rest with him in Heaven where they belong.