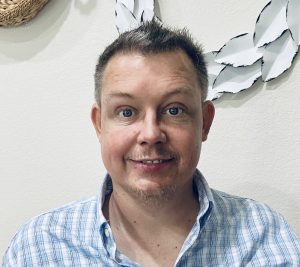 It is with great sadness to announce that Daniel Heighway, 42, died May 26, 2021 at MD Anderson Cancer Center Hospital after a three year battle with Leukemia. He passed away peacefully and was surrounded by warmth and love from his family.
Daniel was born on July 11, 1978 in Evesham, Worcestershire in the beautiful country of England.
In 1995 he served in the British Army of Royal Engineers as a private soldier for almost 9 years and completed several tours abroad, most notably in Kosovo in southeastern Europe. Daniel was married to Gina Clarissa Heighway (Martinez) on January 7, 2006. In July of 2009 they were blessed with a baby girl that became the light in their lives.
Daniel worked as a service regional manager for Tennant Company and was awarded Manager of the Year for 2020. He immensely enjoyed working for Tennant and would often mention how lucky he was to have found a job that not only made him happy but introduced him to so many people that would become his good friends. He also loved adventure and traveling and was able to work and vacation in many different places, states, and countries. His hobbies included target shooting, coin collecting and taking apart and fixing things, just to see how they worked. Above all, Daniel was loyal, strong, funny, and kind.
Daniel was preceded in death by his paternal grandparents, Gordon Henry Heighway and Julia Heighway, (Pritchard) and his maternal grandparents, Albert George Pound and Myra Kathleen Pound (Colwill).
Daniel is survived by his wife, Gina C. Heighway and daughter, Sophia Marie Heighway of Houston, Texas; his parents Gordon John Heighway and Hilda Caroleen Joyce Heighway (Pound); his two older sisters, Sharon (John) Cooper and Angela (Dean) Fisher; along with his nieces Charlotte, Abigayle, Kimberly, Ellie Mae, and his only nephew Adam, all of Spalding Lincolnshire.
Visitation and funeral services will take place on Thursday June 3, 2021 from 3:00 p.m. to 5:00 p.m. at Darst Funeral Home Kingwood, Texas.

Daniel we love you so very very much and always will. Our hearts have been broken and we are so very sad that you have left us at such a young age. We hope that you are at peace in heaven with some of your old friends Until we meet again Daniel our son. Love from Mum & Dad.xxxxx

Daniel, you are and will always be my little brother, sadly your time to go came too soon, no time for goodbyes , you don’t have to fight the pain anymore , fly high be free and keep smiling.
Love you always
Angela (sister) xxxx

No words can describe how sorry I am at the passing of Daniel.

No one can prepare you for such a loss, it came so suddenly and too soon but take comfort in knowing that he is now at peace, sleeping the eternal sleep.

After the tears have dried and the goodbyes have been said, we will still have the happy memories that we have all shared with him.

From one old soldier to another:

I will always remember the times together, times where we weren’t allowed in your car with our shoes on just in case ‘we tracked mud in it’ or the times on your mini motorcycle around the garden at Nan and Grandads.

Although you are now at peace and free from the pain, you can’t be prepared for such loss when it happens.

As we say goodbye to you tonight from across the sea, I will raise a glass to celebrate your life.

You did so many incredible things in your life, and you can rest knowing that Gina and Sophia will always have a home with us.

You and your memories will live through the ones those who loved you.

I love you uncle Dan, may you rest in peace. xx

You shouldn’t of been taken from this world so soon, you were are great person loving, friendly and caring.

I was always Happy to see you growing up when ever I got the chance, Playing on the Sega mega drive playing Sonic or the dream cast playing Crazy taxi, riding with you on that mini motorcycle in the fields, I had fond memories of you, I always respected you, I feel so privilege to have been able to travel to America to see you, you welcomed Samantha and myself with open arms, for that I’m truly thankful.

I always thought of you as an Older brother then an uncle, May you finally rest So this isn’t Goodbye, this is until we meet again.

Love you, your nephew Adam x

I offer my heartfelt condolences to you may Daniel soul ever at peace with our Heavenly Father I pray for peace and comfort for you and your loved once at this difficult time. You are in my thoughts and prayers

Dan, I can’t believe that you are no longer here. It is not supposed to be like this. You are and always have been the kindest person I have known. Always smiling and laughing. We already miss you and hope that one day we will meet again. RIP little bro. Sharon xx

Our heartfelt condolences! Daniel may be gone from our sight, but never from our hearts!!💖
Aunt Minnie Uncle Robert