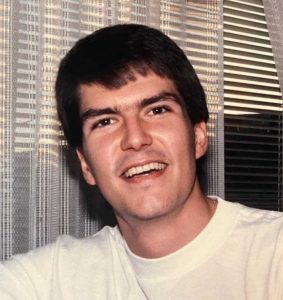 Boating and maritime enthusiast Peter (Pete) Sheffield Ring passed away on Monday, May 31, 2021 at the age of 59 after a courageous battle with cancer, surrounded by his family.

Pete was born to Delmar Ring and Jean Ring on November 5, 1961 in Doylestown, PA. He was the youngest of four brothers and was known to be the most spontaneous and adrenaline seeking of them all. He discovered an affinity for music at a very young age, teaching himself to play guitar at the age of 12. He was a technical genius, also teaching himself to program software and write web coding. He could build and design many types of computers, databases, and websites and was the family go-to for any and all technology help. He enjoyed careers with IBM and Compaq. He also had a love for the sea that could hardly be described with words. He enjoyed scuba diving, boating, sailing and fantasized about a permanent residence at sea.

He resided in Houston for the majority of His adult life where he could be close to his daughter. Other places of residence included Key West and Daytona, Florida. His life came to an end while his brother, Steve, cared for him in his home during and after his cancer diagnosis and treatment. He is preceded in death by his parents Del Mar and Jean Ring. He is survived by his daughter, Tracie Kamenoff of Houston, Tx and husband Lee Kamenoff, granddaughters Olivia (3) and Mila (2), brother Larry Ring of Cincinnati, OH and wife Linda Ring, brother John Ring of Frisco, CO, and brother Steve Ring of Houston, TX.

A funeral service will be held at a later date at St. Martha’s Catholic Church in Kingwood, TX.

In lieu of flowers, donations can be made to The University of Texas Cancer Center, Pain Research and Treatment Center. Visit www.mdanderson.org/gifts, “Give in Memory of” to include Peter’s information.