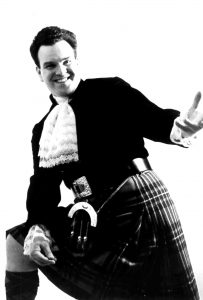 Alexander McMahon of Kingwood, Texas, breathed his last on May 24, 2021 at his home. He was born on January 3, 1933 at 74 Haugh Road in Glasgow, Scotland to Alexander and Mary Jane (Mulherine) McMahon, the youngest of five children by eight years. Thus, he spent most of his childhood as the darling “wee Alec” to his parents and three older sisters. (His eldest brother Andrew was serving in North Africa for much of his childhood.) It was the Boy’s Brigade that instilled in him “a true Christian manliness” (that was part of their mission statement). Alex would speak fondly of these memories and of his faithful scout master, with whom he kept in contact for many years.

Already at a young age people noticed his tremendous talent for singing, whether it was singing for the family or with the boys’ choir of their local church. For part of his youth Alex lived with his maternal grandparents in Moville, Ireland, a fishing village. He had been sent there with his mum and sisters to avoid the heavy bombing that Glasgow attracted as a major port during the war.

Alex was twelve years old when the war ended. Back in Glasgow he was apprenticed to a local cabinet builder and started contributing to the household. He fondly remembered putting his wages into his mum’s apron at the end of the week. When he turned sixteen Alex joined the British Army and was assigned to the 26 FD ENGR (Field Engineer) Regiment stationed in Hamelin, Germany. He was a quick study in German and enjoyed time off the base soaking up the local culture. He made many friends while in Germany, but most important was Professor Willi Rubin and his wife, Marie. Professor Rubin encouraged Alex to pursue his musical vocation and helped him get more training in opera, for which his voice seemed especially well-suited.

After six years in the British army Alex returned to Glasgow and joined the local dock workers union. Many of his fellow stevedores were relatives of one form or another, since Alex’s father was one of twenty-two siblings. Meanwhile, Alex continued to pursue his passion for vocal performance and made plans to emigrate. When he had saved enough money, he boarded the Queen Elizabeth II bound for America. It was 1962 when he joined his sister Eileen and her husband Charlie in Pontiac, Michigan, but before long Alex got drafted into the American Army and was shipped back to Europe, this time serving in France. Fortunately, he was placed with the chaplaincy department and was able to continue his vocal training with a mentor from the Conservatoire de Bordeaux. Of course, Alex took this opportunity to pick up another language as well.

In 1965 Alex returned to Michigan to begin civilian life. One snowy Christmas Eve, after singing at a Lutheran Church, the weather forced him to stay over with the pastor and his wife, Ed and Edythe Azzam. They could not wait to introduce him to Jean Mary Bredernitz, and, probably beyond the expectations of the matchmakers, a whirlwind courtship ensued. Alex and Jeanie decided to get married and moved to New York City. They settled in the Bay Ridge area of Brooklyn and Alex divided his time between his day job with the Carpenters’ Union, auditioning to perform, and pursuing vocal studies with Filippo DeStefano.

In 1966 Alex and Jeanie added their daughter Jeanine to the family. They eventually settled in Emerson NJ. Alex continued to sing, performing regularly at The Carriage Club and appearing most notably on “Opera Stars of Tomorrow” and the “Ted Mack Show.” After being invited to audition with the Metropolitan Opera, Alex decided to forego the travel this would involve, and to devote himself instead to his family and his cabinet business, Designs by Mac, Inc. He operated this custom cabinet shop and kitchen and furniture showroom for many years. In his spare time, he developed a love of painting and would spend many evenings at a paint class or at his art bench.

Alex and Jeanie put down roots in New Jersey, nurtured a strong circle of friends, and eventually Alex became a naturalized citizen of the U.S.A. At Bethlehem Lutheran Church in Ridgewood, New Jersey, their daughter met her husband while he was on vicarage, and this eventually led them to Kingwood, Texas so they could be closer to their three (soon to be four) grandchildren. Retirement agreed with Alex. He frequently served as a soloist at Kingwood First Presbyterian Church, but eventually landed on Sunday mornings at Christ the King Lutheran Church as well, especially when his son-in-law was preaching.

Alex spent many afternoons with Jeanie and the friends from the Young at Heart (YAH) group at CTK, and many evenings with his friends at the Lodge. He could always find time to go to lunch, preferably at Italianos. Coffee from McDonalds became an excuse to get out of the house and greet some people. He loved to stop by the church office to spread some cheer. Alex rarely missed a fine arts performance of one of his grandchildren. After each concert, he would find the director and share with them how much the program had meant to him.

Alex McMahon was generous with his praise and generous with his strawberry candy as well. He always kept a pocket full of treats to give out. These left a smile on the face and a little sweetness for later on. Alex always had a kind word or a beautiful song, most notably, in his latter years, the grand finale of “Happy Birthday.” He had a song in his heart and will be fondly remembered for his singing, his Scots burr, and his smile.

Alexander McMahon is predeceased by his parents, his brother Andrew, and his sisters May, Eileen, and Dinah. He survived by his wife Jean, his daughter Jeanine Theimer (Doyle), grandchildren Alexander (Jasmin), Trevor, Zachary, and Kendra; several nieces and a nephew on the McMahon side, and a brother-in-law, nephews and a niece on the Bredernitz side.

A Memorial Service will be held Friday, June 4, 10:30 a.m. at Christ the King Lutheran Church, 3803 West Lake Houston Parkway, Kingwood, TX, 77339. The service will be live-streamed at https://www.youtube.com/c/CTKLutheran.

In lieu of flowers contributions may be made to The Boys Brigade c/o Christ the King Lutheran Church.

Deepest sympathy on the passing of a wonderful husband, father, grandfather, and a friend to all who knew and loved him! Alex had a booming voice to go along with his booming personality! He will be missed, but make no mistake, Alex left his mark, and he is now happily in the arms of our loving Savior!

Thank you for the grand memories, the candy, and the terrific hugs😊. We love you and will miss you until we are together again❤️

I am so sorry for all of you. I always loved visiting with Alex. Jeanie I feel for you this is not an easy position to be in. Love to you all

Alex was so wonderful – one never to forget- so kind – such an amazing voice! My condolences Jeanie – Hugs ♥️

From a runway in Nebraska: A true gentleman, a welcoming host and always ready with a word of encouragement. We will mis. His sweet handshakes and his warm greetings. Always interested in others and rarely talking about himself. May God grant him rest and relief from his pain.

Our prayers are with you as you bid farewell to dear Alex. He is singing with the angels today!
Glenn and Lynn