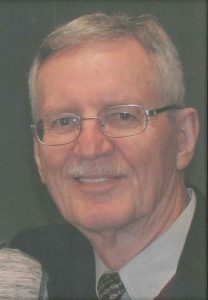 Harvey Arthur Krueger, 82, died peacefully at home in Kingwood, TX on May 22, 2021 with his wife, Linda, by his side. Harvey was born April 11, 1939 in Brenham, TX to Edwin and Edna Krueger and had one older brother, Edward Al Krueger. Harvey grew up surrounded by many German-immigrant cousins, aunts, and uncles, and was very popular in high school where he played football and basketball and was named class ‘Sweetheart’ in 1956.

From a young age Harvey loved to paint and draw, and during his high school years he worked at Blue Bell Creamery, which allowed him his first opportunity to show off his artistic talents creating ice cream ads. Harvey eventually earned a BS degree in Commercial Art at Lamar University in Beaumont, TX. During his younger years, Harvey taught himself to play guitar and funded his schooling by playing in various bands. Harvey eventually joined the U.S. Army and continued to play guitar off and on for the rest of his life.

After graduation, Harvey created art for various organizations including the Shriners circus and Exxon, opened his own art gallery in Kingwood, and eventually started his own commercial art design business in Houston, which he worked successfully for over 30 years. Harvey and wife Linda celebrated 55 years of marriage together and had two sons, Brian and Trent, and one daughter, Stacey who they raised in New Caney, TX.

Harvey retired from the art department at Conoco Phillips in 2006 and he and wife Linda settled into their retirement at a senior community in Kingwood, TX some years later. During retirement, Harvey and Linda spent time loving on their many grandkids, playing dominoes with their dearest friends, and visiting with family. Harvey was also a beloved deacon at their church, Kingwood Second Baptist. He continued to paint and showcase his art long into his retirement and after Parkinson’s took away his ability to play guitar, he could often be found with his headphones on listening to his favorite music.

Harvey is preceded in death by his parents, Edwin and Edna Krueger of Brenham, TX, and his brother, Edward Krueger, of San Antonio. Harvey is survived by his wife, Linda; their eldest son and wife, Brian and Rachel of San Antonio, TX; their daughter Stacey of Phoenix, AZ; and youngest son and wife, Trent and Ashley of Houston, TX. Surviving grandchildren: Jackson, Preston, Sydney, Reagan, Lyndsey, Delaney, Avery, and Olivia; and one great-granddaughter, Brailynn.

Harvey has left a lasting legacy of service, love for country, love for Jesus, and unconditional love for his family – his life will forever be celebrated by those who knew him.

Services for Harvey will be announced at a later date.

So sorry to hear about Harvey. Praying for Linda and all of the family

First time I ever met this gentle man and his lovely wife they made me feel welcome. It did not take long to grow to love them as very dear friends. I was always in awe of the talent that Harvey had . He could turn a canvas into a beautiful picture and made it look so natural.
I enjoyed visiting and getting to know Harvey and Linda and always felt a warmth when visiting them. I enjoyed their company and fellowship on many occasions. God bless and thank you for many sweet memories. Harvey, will be missed

Mr. Krueger was a very special person and a great man. He will be truly missed by all of his family and friends and the deacons at Second Baptist. My prayers go to Mrs. Krueger, Brain,Stacey and Trent.

So sorry to hear about Harvey’s passing! Harvey was a Godly man with a servants heart! He will be missed greatly! Linda we are praying for you!

Harvey is deeply missed by all that ever had the honor of knowing him. He was one of several mentor’s I’ve had at Second Baptist and will be forever grateful for the time we served together. My prayers now are for Linda and family during the days ahead. May God give your strength, comfort, and peace. We all mourn for Harvey now, but also celebrate his Life, a Life well lived for our Lord and Savior Jesus Christ. We will be together one day with Harvey and our Lord eternally. God Bless, Charles

I first met the Kruegers the fall of 2006 when I helped coteach Cubbies in Awana at our church home of Second Baptist North. I cotaught a class for their granddaughter and others. Mrs. Krueger and I sang in choir together. I knew Harvey as an encourager, faithful husband to his wife and believer in Jesus Christ, and faithful witness. Harvey was often at church and even at various venues for choir events. His smiles and listening ears were answers to prayer in moments of need by many in our congregation, even those who were mere visitors. I was blessed by the gentle spirit I saw portrayed in him. For matters of significance, he was bold to speak. For matters seeming “trivial” to others, he knew it might be significant to God. The Bible talks about the timing of words, gestures, and expressions of emotion. I knew of not many others I witnessed on earth in synche so much with the timing of God and demonstration of the Holy Spirit on those matters to bless, inspire, call out if necessary, and share truth in kindness and love to maintain a bond of peace not merely for those HE knew personally but also for a hurting world to consider the needs of outsiders and his own in his actions or those he was designated to lead, inspire, witness, and serve.

Larry and I are so sorry for your loss. I will always remember Harvey as such a creative and talented artist and musician. May memories comfort the family and bring you peace.

We are very sorry to learn of cousin Harvey’s passing. Harvey was a very talented person and will certainly be missed. He is the tenth of sixteen Harms family cousins to join Jesus in heaven.May God bless his soul.Our prayers are with you.

Prayers for you all. Harvey was very special to us. He will be greetlyissef.