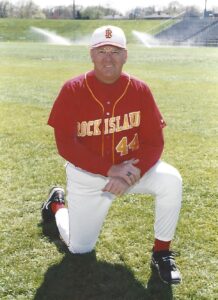 Gary Harvey Bender, always known as “Coach B”, of Rock Island, Illinois and Kingwood, Texas passed away on Saturday, May 8, 2021 at the age of 72. Gary died peacefully after a lengthy stay in nursing home and hospice care. Family members were all able to visit with him over the last few weeks of his life. Over the last two days, his final words were “Baseball” and “I’m Happy”.

Gary was born on October 29, 1948 to Harvey and Wahneta Bender. The older brother to Randy, and kin to many in the Bender and Shinn families of the Quad Cities. Growing up the son of a Rock Island Arsenal machinist, he learned from an early age the value of hard work and a never give up attitude. Gary used these lessons to progress through his youth years as a force to be reckoned with on the pitcher’s mound and at the plate. He would continue playing through his years at Rock Island High School and then he would go on to play college baseball at Culver Stockton College, where he was also a proud member of the TKE fraternity. During his final year of college, upon a weekend visit back to Rock Island, he would meet the single most important person in his life, Terry “Tee” Dohrn. Gary and Tee wasted no time in tying the knot and began their illustrious and monumental impact on the youth of the Rock Island school district 41 when they both began their teaching careers in the fall of 1971. Gary was able to progress through the assistant coaching ranks through the early years, and then in the fall of 1984 he was named the head baseball coach for the Rock Island Rocks. He brought energy, passion, selflessness, love, and Bender-Ball to the Rock.

In 1999, Coach B was enshrined in the Illinois High School Coaches Association Hall of Fame. This, along with taking his first Rocky team to State in 1985 and winning the Little League State tourney the same year as the Milan LL coach sit near the top of his achievements. However, if you were to ask him about is biggest and proudest achievements, it would be about the thousands of kids that he helped and mentored as one of the most influential persons to ever don the “Red and Gold”. He was always looking for the good in everyone and would go out of his way to make someone’s day special. Early in his career he instilled his motto into everything he did and shared it with everyone he could. “Attitude is Everything”

Gary and Tee retired to Texas in 2004. The Zone Baseball Facility and Dynasty Baseball program were born, along with their two sons and bonus son, Jason Harvey, “Bender-Ball” and “Attitude is Everything” would now have a home in Texas. Dynasty Baseball has now been around for over 15 years and continues to personify the values that Coach B will forever be known for. He knew that, to build a “Dynasty”, it would take time, effort, money, supportive coaches, families, and, of course, love. His legacy will live on through all the families that he has impacted in both Illinois and Texas, and he will be forever remembered.

Gary was preceded in death by his parents, Harvey, and Wahneta Bender, as well as, his grand-daughter, Addison Faith Bender. He is survived by his loving wife and assistant coach of 50 years, Terry “Tee” Bender (Dohrn); children Tony Bender, Heath Bender, and Jason Harvey; daughters in law Amber Bender and Kristen Roesler; grand-children Trenton Bender, Riley Bender, Oivia Bender, Beau Bender, Ben Chattaway, and Mason Chattaway; brother Randy Bender and his wife Cindy Bender and their two children, Janson Bender and Jenna Mikkelson, and their children Broderick, Brylan, Braxton, and Griffin. A “Celebration of Life” is going to be held on Sunday, May 30, at The Zone Baseball Facility from 3:00-7:00. Music and gathering, along with many stories and laughter about this great man! Please wear baseball apparel and jerseys for the event.

An additional Rock Island Celebration of Life is currently being planned for a day in June. This date will be announced over the next few weeks.

People wishing to honor Gary’s lifelong commitment to children and the community can make donations to Dynasty Baseball, for a memorial scholarship, or to Addi’s Faith Foundation, in honor of his late granddaughter, Addison Faith, who died of a malignant brain tumor in 2007.

A “Celebration of Life” is going to be held on Sunday, May 30, at The Zone Baseball Facility from 3:00-7:00. Music and gathering, along with many stories and laughter about this great man! Please wear baseball apparel and jerseys for the event.

A "Celebration of Life" is going to be held on Sunday, May 30, at The Zone Baseball Facility from 3:00-7:00pm. Music and gathering, along with many stories and laughter about this great man! Please wear baseball apparel and jersey for the event.

Tony, so sorry to hear of your Dad’s passing. I always enjoyed visiting with you Dad. Our thoughts and prayers are with you and the entire family.
Jan and Karen Adelman

Tony, so very sorry for your loss. You are in our thoughts and prayers. I graduated from Rocky with Gary. Rita

I am so sorry to hear about Gary. He was a huge part of our life which we will have in our memories forever. He had such a big heart for the Dynasty players and was a great coach to my son, Matthew. He will be missed.

Gary had the ability to light up the darkest room, always positive. Attitude truly is everything! Gary will be dearly missed.

Gary was a joy to coach with and know.

My heart aches for Tee & the boys and all of those close to Gary. He was truly a very kind, special person. The Rock Island Class of 1966 is so proud of our classmate. May God hold all of you in the palm his hand. Comfort & blessings to all who knew Gary.
Pam Norton Schuldt RIHS Class of ‘66

Heath,
We are very sorry for your loss.

My heartfelt sympathies to you and your family. I remember Gary for his great sense of humor. One really nice guy! Thank you for writing such a detailed obituary, it filled me in on his inspirational life.🙏🙏🙏

Gary was a great guy and always competitive in everything he did. As a classmate I always admired him and enjoyed his friendship.

Coach Bender helped start my career at Black Hawk College when I began my baseball coaching career. I worked baseball camps with him, recruited his high school stars, and shared his knowledge with players I coached. I always said, “the apple doesn’t fall far from the tree”. Jason, Tony, and Heath were not only great baseball players, but great young men. Gary and Tee did a wonderful job raising their kids. My sincere condolences to the Bender family. Coach Bender was not only a great coach, but also a great man.

“I’m saddened to hear of the passing of Coach B. My thoughts are with you and your family. Praying four your comfort.

Gary was such a sweet guy who cared about others. I knew him as a young girl because our Dads worked together. He came to both my Dad and Moms funerals. We really appreciated that. Rest In Peace Gary.

I am so sorry to hear this – what a great man! He spoke with my son who wanted to quit playing after his dad passed away and helped my son get connected to The Zone and to Dynasty. A great loss. My prayers are with his family.

Gary was a friend, teammate, and colleague.
His passing is a great loss and I shall miss him.