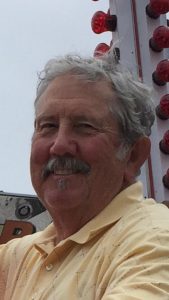 Henry Owen Blackmore, 78, passed away on Monday, March 29, 2021 in Houston, Texas.  Owen was born on September 21, 1942 in Detroit, Michigan to Henry and Mary Blackmore who both precede him in death. He graduated from Moberly High School and then served proudly on the USS Oriskany in the United States Navy from 1963-1967.  After fulfilling his service to his country, Owen attended Moberly Junior College and eventually retired from the Railroad after 40 years.

I played a lot of golf with Owen several years back in McKinney, Tx. Owen was a really great man and I am blessed to have met him. Rest in peace brother.

With our deepest sympathies we are so sorry for your loss. We will miss you Mr. Owen. With love your neighbors, Jeff & Terri

Henry was a friend to our families in Huntsville & Moberly, (Harris & Wilson) Missouri. He was a good guy and enjoyed by all who knew him. Henry will be missed. God is with him now.

Owen “Blackie” as many of his fellow golfers referred to him, was a true competitor. He exhibited great skills as a business man, being fair and try to assist in any way he could. Owen you will be missed.

Owen was a good golfer and a very good railroad man. He was honorable in business and with his friends. I was lucky to be his friend.

So sorry to hear of Owen’s passing. He was a fine person and will be missed by all who knew him.

I will keep him in my daily prayers.