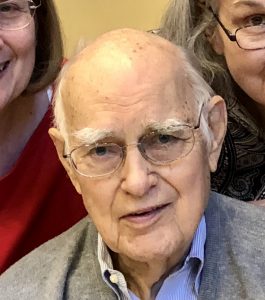 Bill was born in Waco, Texas, on August 17, 1927, to Gladys Mae Royall and William Franklin Bolding. Following the death of this mother when Bill was 5, he was raised in Waco by his maternal grandparents, Maude and Eddie Banks Royall, who taught him to be proud of his early Texas ancestors who first came to Texas in 1820. Upon high school graduation in 1945, Bill enlisted in the U.S. Navy and served in the Pacific on the USS Rolette. Finishing his Navy service, he enrolled in Texas A&M University. In 1948 Bill joined Union Oil Company of California (later known as Unocal) Land Department starting in Corpus Christi, Texas. Over the next 38 years, he worked in the New Orleans and Houston offices as well. At the time of his retirement in 1986, he was the Manager of Lands for the Gulf Coast Region.

A lifelong avid fisherman, Bill enjoyed fishing and traveling the country in his RV. In his retirement years, Bill loved spending time with his grandchildren and teaching them to fish. They loved going out on the lake on Papa’s boat.

At Bill’s request, no services will be held.

The family wishes to thank The Heights at Valley Ranch nursing facility and Altus Hospice for their compassionate care of Dad in his final days.