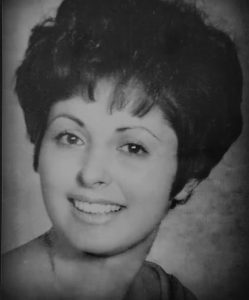 Carmelita Macdonald passed away on the morning of February 8 at 3:41 am at the age of 83 in Kingwood Texas. She was born in Chicago Illinois to Josephine and Carmen Aiello on July 9, 1937. She is survived by her 2 sisters Gloria (Aiello) Bush and Claudia (Aiello) Snavely who she loved dearly. Carmelita graduated from Morton High School and married Robert (Bob) Macdonald at the age of 19, he was just 21 years old. They immediately started a family with the birth of their first child, Victoria. Carmelita was a trooper and moved all over the country with her husband’s job transfers at IBM and then Amdahl Corp. (Corpus Christi TX, Kansas City KS, Ridgefield Conn, Upper St. Clair PA, Bloomfield Hills MI, Saratoga CA, Lake Oswego OR, Falls Church VA and Stafford VA. She and Bob moved to Kingwood Texas about 10 years ago to live near their daughter Diana as her health declined.

Carmelita and her husband Bob shared 63 years of marriage together. When Bob died on Sept. 10, 2019, she was at his bedside along with their remaining children Diana, Stephen and Robert. Because Carmelita had dementia, most of the time she did not recall that Bob was her husband. But that day, during his last moments she announced that she remembered everything and told Bob that she loved him, that she always loved him. Then, just before he took his last breath, Carmelita spoke for him and said “he says he loves you and he’s dead”. A few days after his death, she did not even remember that he died.

A few years ago, she said her greatest accomplishments were to have raised her 5 children: Victoria Macdonald, Diana (Coleman), Stephen Macdonald, Robert Macdonald and Carmen Macdonald.

Carmelita was an avid reader, an excellent cook, she enjoyed tennis and dancing, loved talk radio and she especially loved to entertain. She was very honest and critical when it came to recipes. You did not want to compete with her in the kitchen. She is deeply loved by her 5 children, 11 grandchildren (Gregory Coleman, Robert Coleman, Joseph Coleman, Mason Macdonald Gaines, Kristin Macdonald, Luke Macdonald, Nicholas Macdonald, Christina Macdonald, Michael Macdonald, Jackson Macdonald and Kendal Macdonald) and 7 great-grandchildren (Daniel Coleman, Katelyn Coleman, James Coleman, Luke Coleman, Brody Macdonald, Cooper Gaines and Crew Gaines).

A funeral mass will be held at St. Martha’s Catholic Church on Wednesday March 24th at 2 pm. There will be a reception in the church entry hall/vestibule immediately following the mass.

You can attend by copying this link for the livestream for Carmelita’s funeral mass:

A funeral mass will be held at St. Martha’s Catholic Church on Wednesday March 24th at 2 pm. There will be a reception in the church entry hall/vestibule immediately following the mass.

One condolence on “Macdonald, Carmalita”

I just recently found out that my cousin passed away. My deepest condolences to her family.