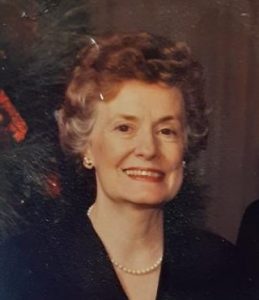 Catherine “Kay” Harrup Sutton passed away on November 22, 2020 in Kingwood,
Texas at the age of 93. Kay was born December 21, 1926 in Oklahoma City, Oklahoma.
Kay was one of six children born to Paul Louis Harrup originally from Virginia and
Lucille Montgomery Martin originally from Alabama.
After graduation from Albuquerque New Mexico High School Kay returned to
Oklahoma were she was accepted to Oklahoma State University in Stillwater where
she graduated with a B.A. in Journalism. While at OSU Kay became a member of
Kappa Alpha Theta Sorority where her two older sisters were also Thetas. At OSU Kay
met her future husband Bill Lee Sutton of Bartlesville, Oklahoma, who had returned
from active duty in Europe during World War II to continue his education. While he was
serving the Theta sorority house as a busboy, Lee asked Kay for their first date
together. Three years later in 1949 Kay and Lee were married in Waco, Texas at the
Harrup family home. Before Lee passed away in 2018, the couple were married for 69
years.
In 1951 Kay moved to Shreveport, Louisiana where she and Lee started a family and
Lee began a long career as an interior designer. In addition to being a loving wife and
mother, Kay continued her love and support of the arts where she served as a docent
for 15 years at the Meadows Museum of Art at Centenary College of Louisiana. Kay
also became an excellent bridge player perfecting the game she learned from her
parents during the Great Depression. Kay was also a devoted friend for many years.
Recently Kay was recognized as a 75 year member of Kappa Alpha Theta Sorority.
In 2015 Kay and Lee moved to Kingwood, Texas to be close to family. Kay is survived
by one younger sister Eleanor Ann Teel of Tulsa, Oklahoma, her son Randy Sutton and
wife Carol Sutton, and her son Robert Sutton of Kingwood. Kay is also survived by four
granddaughters, Alison Sutton Reynolds and husband Brian Reynolds of Houston,
Texas, Megan Sutton Garcia and husband Raul Garcia of Pflugerville, Texas, Kelly
Sutton Reeves and husband Clint Reeves, Erin Sutton Moberley and husband Garrett
Moberley both of Houston, Texas, Ashley Elizabeth Sutton (deceased 2010), and seven
great grandchildren.
The family would like to thank the numerous caregivers at Landon Ridge Assisted
Living Community in Kingwood for their service and commitment to the Suttons. In lieu
of flowers donations can be sent in Kay’s memory to the Eternal Flame Endowment
Fund at First United Methodist Church in Shreveport, Louisiana where Kay and Lee
were members for over 60 years. A memorial service will be held for Kay at a date and
time to be determined in the near future. For other details go to:
www.darstfuneralho.wpengine.com/obit/kay-harrup-sutton.