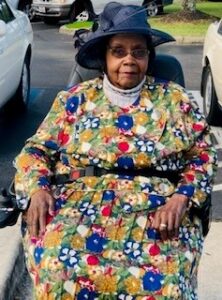 Lydia Mae Hibbert was born on December 27, 1928 to Robert and Dorcas Boyce in Detroit, Michigan. She was the seventh of eleven siblings. She attended Nellie Leland School for Elementary and Middle School and Cass Technical High School. In High School, she was encouraged to take dress design and sewing, and chose that craft as a profession. At an early age Lydia was afflicted with polio. However, her physical limitations did not deter her from achieving her goals.

GOD’s Grace
Lydia grew up attending Bethel African Methodist Episcopal (A.M.E) Church, one of the largest African-American churches in Detroit. She enjoyed attending Christian education conferences and taking course work. In her later years, she became the Sunday School Superintendent and functioned in that capacity for over twenty-five years. During, that time, she coached and mentored several women and men who went on to seminary training followed by ministry.

Community Involvement
While in her teens, Lydia became actively involved with The National Housewives League of America. The organization was founded in 1933 by Fannie B. Peck at Bethel A.M.E. Church advocating entrepreneurship, job creation and self-sufficiency in the African American community. The organization at the peak of its’ influence supported 140 chapters and 10,000 members, but the National Housewives League of Detroit chapter was the most prominent. In 1971, Lydia became the President of the National Housewives League of America. Highlights of her service an be found in the Library of Congress Additionally, Lydia was the precinct supervisor for the Detroit Board of Elections in the Jeffries Housing Projects for over twenty years, overseeing ballot voting operations for primary and general election. When her children were young she was active with the savings bond program at Brady Elementary School.

Family
Lydia was married to Alfred Alexander Hibbert in 1957. From that union, they had two sons Daryl and Castel Hibbert. In 1968, they were blessed to become legal guardian to Alfred’s niece, Sonia Rose. Alfred and Lydia lived in Michigan until they moved to Houston, Texas in 2000 with their son, Castel and daughter-in-law Lorraine. In 2001, they joined Champion Forest Baptist Church and became active in the King’s Business Class. Lydia served as Card Chairman and enjoyed sending cards monthly to her sick and shut-in classmates to encourage and remind them that they are in GOD’s favor and love. Lydia in her lifetime travelled abroad extensively and throughout the U.S. Her extracurricular activities included attending ceramic class at the Doss Center, Bible Study Fellowship, playing games, watching movies and attending the Ensemble Theater monthly.

Career
After all three children attended college, Lydia decided to return to college and obtain an Associate Degree in Secretarial Sciences from Wayne County Community College. Lydia worked for the United States Tank Automotive Command (TACOM) for ten years. During that time, she received numerous commendations with increased responsibilities. She went from providing secretarial support to three and four-star generals, to becoming an Items Manager with high level security clearance prior to her retirement

Lydia is preceded in death by her husband Alfred Hibbert of forty-seven years; parents Dorcas and Robert Boyce, and all ten of her siblings: Arthur and Ollie Pleasant; Robert, Ben, Charles and James Boyce; Joe and William Jones; Mary Simmons, and Ethel Whatley. Her three children remain to celebrate her life along with her grandchildren Justin, Bradley, Cassie, Joy and Daniel and great grandchildren, Noah, Ezra, Declan, Eleanor, Lyla, Alyssa, Zoe, and daughters in law Lorraine and Michelle Hibbert, and numerous nephews and nieces.

A private family Celebration of Life for Lydia Mae Hibbert, 91, of Tomball, Texas were held at The Stone Chapel.

One condolence on “Hibbert, Lydia M.”

To the Hibbert Family, We send our sincere condolences. Mother Hibbert is very dear to us and all who know her. Our thoughts and prayers are with you all. May the Lord Bless and keep you, and the Lord make his face shine upon you, and be gracious to you and give you peace. Numbers 6:24-26.ESV