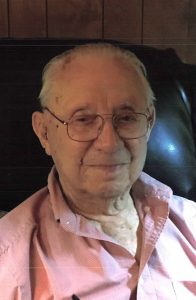 Walter Mainarich, beloved father and grandfather, passed into the arms of our Lord on November 28, 2020.  Walter was born November 1, 1921 in Chataignier, Louisiana to Paul and Cidelise Mainarich.

At age 18, Walter joined the U.S. Army Air Force, serving as an Army Airways Communications Specialist in the Pacific theatre, where he set up point-to-point / air-to-ground communications. In 1947, he was selected as a high speed radio operator for the joint Army Air Force-National Geographic Society’s expedition to South America to observe/film a total eclipse of the sun.  Upon his return to the United States, he was stationed at Bergstrom Air Force Base in Austin, Texas, where in June 1948 he met and married Signal Corp employee Velda Cook, who became his loving wife for 68 years. But before they had completely settled to domestic life, Uncle Sam interrupted when Walter was transferred to Stuttgart, Germany to support the Air Force’s efforts during the Berlin Air Lift.  While in Germany, Walter was able to attend a number of German opera performances and, as a result, became a lifelong opera fan.

After his honorable discharge, he worked as an air traffic controller for the Federal Aviation Administration. Walter worked at the Houston Air Route Traffic Control Center, where he was supervisor of the San Antonio/Southwest Specialty team. Though he eventually wanted to retire, Walt agreed to extend his work for 2 more years to cover FAA vacancies created by the 1981 air traffic controllers’ strike during the Reagan years when many controllers quit.  He taught himself to play the piano and built his own telescope that enriched the lives of his neighbors on many nights. He enjoyed a full life of 99 years and enjoyed golf, computers, and loved swapping jokes with friends and family on facebook.

Walter was known for his gentle, generous, soft-spoken, and patient spirit and his ability to fix just about anything. While providing well for his family, he likewise taught his two daughters that they could do anything they set their minds to. Walter was preceded in death by his cherished wife, Velda. He is survived by his dear family including sister Helen Binz, daughter Sharon Gail Mainarich, daughter Judy Ragsdale and husband David, grandchildren Lauren Michelle Ragsdale and Michael Scott Ragsdale, nieces, and nephews. Walter was loved very much by his family and will be greatly missed. Also, a special thanks to his wonderful caregivers over the past few years.

A visitation will be held for Mr. Mainarich at Darst Funeral Home on Saturday, December 5, 2020 at 10 a.m. with funeral services to follow at 11 a.m. Burial will be at 12:30 p.m. at Brookside Cemetery.

Sharon,
So sorry to hear of your father’s passing. Our thoughts and prayers are with you and your family.
Nancy and Laura Pinckard

Our family is so saddened by the loss of your Dad. He was a gentle, wonderful man. You are in our thoughts and prayers. Love, Kathryn and Gary

Sharon and Judy,
I am so sorry for the loss of your dad – he had a wonderful family and enjoyed a very happy and productive life. I wish you peace and comfort in the days ahead.
Brenda Johnson

Judy & Sharon,
You & your sweet family are in our thoughts & prayers. Your dad was such a precious Saint! The Lord be with y’all in this great loss! We’ll see him again.
Love y’all, Becky Sue & Mom