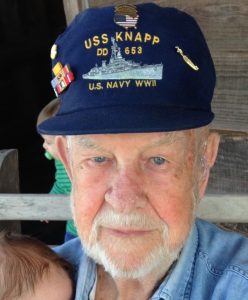 Richard Arthur Stock Sr., of Kingwood, Texas passed away at his home on Tuesday, November 24, 2020.
Richard was born on May 19, 1921 in Pittsburgh, Pennsylvania. He was the second of eight children born to Paul and Agnes Stock. He married Helen Delancey in 1943 in Pittsburgh and they had four sons, Richard Jr., James, Edward and David. Richard served in the United States Navy from 1943 until 1945, during WWII and attained the rank of E2. Richard then had a career working at Westinghouse Electric as a plant manager in Indianapolis, Indiana. He retired in 1986 after serving forty years. After retirement, he was involved in the American Legion in Kokomo, Indiana. Richard then moved to Kingwood, Texas in 2014. Richard’s wife, children and grandchildren were what mattered most to him. Richard loved to golf, and you would often find him in the shop woodworking. He enjoyed listening to country music as well as old gospel music.
Richard is preceded in death by his loving wife, Helen, who passed in 1978, his father: Paul E. Stock, his mother Agnes T. Holleran as well as two brothers and three sisters. He is survived by his sons; Richard and wife, Rosemary Stock of The Villages, Florida, James and wife Carol Stock of Lynchburg, Virginia, Edward and wife Susan Stock of Porter, Texas and David Stock of Victorville, California; grandson Edward and wife Laura Stock; granddaughters Catherine Beresky and husband Charles; Anne Margaret Gomez and husband Frankie; and Annette Stock; seven great grandchildren; his brother Robert Stock; sister Veronica Schad, and many nieces and nephews.
A Funeral Mass will be held Monday, November 30, 2020 at 11 a.m. at St. Martha’s Catholic Church in Porter, Texas. A graveside service will be held on Thursday, December 3, 2020 at 1 pm at Restland Memorial Park in Monroeville, Pennsylvania.

One condolence on “Stock, Richard A.”

Richard Stock served his country with distinction during WWII. He served on the USS Knapp DD-653, a Navy Destroyer in the South Pacific. His ship was engaged in nine major battles and was in Tokyo Bay for the surrender of Japan. He was well liked and a great shipmate that will be missed by all all of the men who served with him. We will keep the family in our prayers.