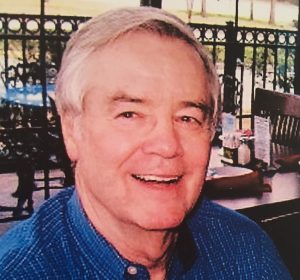 Henry Webb “Bleu” Beathard, 83, a long-time Kingwood resident, died on Tuesday, November 10, 2020. He was born in Kirbyville, Texas on November 15, 1936 to parents Earl and Clara Beathard. Bleu was the dear husband of 62 years to Dickey Beathard, and the adoring father of his children, Trey Beathard (wife Trish) and Mendy Graham (husband Ron). Other survivors include his grandsons, Chase Beathard (wife Candice), Beau Beathard (wife Chelsey), Hayes Beathard and Austin Graham, as well as seven great grandchildren.

Bleu was a proud journalism graduate of Sam Houston State University, where he was president of the Student Council, editor of the school newspaper, and salutatorian of his graduating class. SHSU is a place he maintained close ties to through both former professors and classmates throughout his lifespan. After college, he served as a Second Lieutenant in the Military Police at Fort Gordon, Georgia, and Fort Polk, Louisiana, and later as a First Lieutenant in charge of the Post Stockade at Fort Chaffee, Arkansas. When he returned to civilian life, he pursued his passion, working as a reporter for both the Baytown Sun and Houston Post before becoming editor of the Henderson Daily News in Henderson, Texas. His professional career took a permanent shift as he then embarked on a 26-year career in public affairs for Humble Oil, which later became Exxon. One of his proudest moments during this period was following the Exxon Valdez tanker spill in 1989, when he spent seven months in Valdez, Alaska, as Media Relations Coordinator for the $2 billion clean-up program.  He also was chosen to head Exxon’s media relations team at the company’s Bayway Refinery in New Jersey following a major pipeline leak in Arthur Kill. After retiring from Exxon in 1992, he worked as a consultant in Crisis Communications and Media Interview training for several U.S. and international Exxon affiliates. He was also often called upon by former Exxon supervisors to write remarks to be shared at key employee retirement ceremonies, something he took great pride in, letting both his wit and Exxon experience shine through.

Following his full retirement, Bleu has spent the last several years doing what he loved most, spending time with his family and friends. All who knew him respected Bleu’s commitment to his family, strong work ethic, intelligence, sense of humor, and his ever-present generosity. If there was ever a family member or friend in need, Bleu was the first to show up, ready to lend a hand, offer ideas over a cold Coca Cola, and do whatever needed to be done, not quitting till the job was done. He loved antiques and old tools and was always eager to share this interest with others.

There are no services planned at this time.

There are no services planned at this time.

The Beathards have been apart of my family’s life since before I was born. Bleu was a kind man that always showed my family such love, Bleu was like a grandfather to my late sister and I. He will be missed and always remembered.

I was one of Bleu’s Exxon compatriots…just saw this sad news. Can you forward my email address to Dickey? Thanks.

I am so very sorry to learn of Bleu’s passing. I actually met him and his wife when I was in high school in Baytown in the 1960s. I babysat Trey and maybe Trish. I remember him to be a kind man and a bit of a character and often wondered what became of him and the family. I am happy to learn he was able to pursue his passion, be so successful at it and live such a full life. Please accept my sincere condolences.