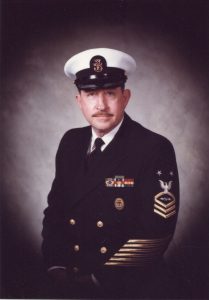 Sometimes God makes men, not of flesh and blood, but of iron and grit. James Pringle was that type of man. This brown-haired, blue-eyed handsome man joined the U.S. Navy when he was only 17 and worked long hours and hard days. He was molded by the salty sea. And he was refined by the sun, as it reflected off the steel of ships like the USS Ticonderoga, hardening him like cured leather into the stalwart man we all knew.

And if fortune hadn’t caught up to him, it certainly would. His luck changed when he met Rose. And through the many years with her, he was softened up just enough to also make him one of the most tender people on Earth, even allowing the thoughts and memories of his late wife to choke him up a time or two—letting flow some of those Pacific Ocean salted tears.

James was a man of principle. He believed that once you’ve committed to doing something that you should do it with all your might and not let anyone get in the way of that. Even in his hobbies, he was devoted—struggling determinately with shaky hands to glue 2 mm long pieces to lifelike airplane models.

His principled approach was reflected in everything to which he put his mind. You could see it in his commitment to his wife and family—in self-sacrifice to provide for his children’s needs and wants and in his determination to be a good husband to his wife. And you could see it in his devotion to God as he honored Him the best he understood how. James Pringle followed, worshiped, and loved Jesus Christ. In these, he was relentless and had his heart set like flint.

James was also quirky and funny in his own way. And when he was spry with more youthful vigor, it wouldn’t be unusual for him to wrestle with the grandkids or shoot BB guns (or real guns) with the same. James loved his family deeply, and willingly served them for as long as he could. He did anything and everything he could for us. All this to say that James Pringle—above all things—was a good man who will be sorely mourned and perpetually missed.

He is preceded in death by his loving wife, Rosalia T. Pringle and his cherished daughter, JoAnn C. Mendiola.