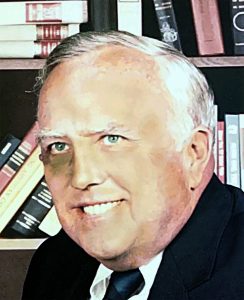 Matthew “Matt” Wall passed away at the age of 91 on July 23, 2020 in Houston, Tx.  Matt was born on May 26, 1929 to Matthew and Marietta Wall in Jersey City, New Jersey.  With the passing of his Father at an early age, Matt assumed responsibility for his education and the care of his family.  He earned a B.S. in Mechanical Engineering and began his career at the M. W. Kellogg Company as a mechanical engineer. During this time he met his wife, Annie Connolly of Burnbank, Scotland, who also worked at the company in New York. While Matt was working his way through all the technical departments at Kellogg, he was awarded a company scholarship, achieving an M.S. in Chemical Engineering from Stevens Institute of Technology in Hoboken, N.J. After his tour in the U.S. Army, Matt returned to the M.W. Kellogg Company, rising in management, ultimately retiring from the company as Senior Vice President of Worldwide Operations in 1985. During his lifetime tenure at Kellogg, where he spent his entire career, he helped lead the company in its headquarters move from the New York/New Jersey area to Houston in the mid 1970’s and its expansion to a leading global hydrocarbon engineering and construction firm.

Travelling the world building refineries, Matt always kept his family close to his heart.  Time away was a responsibility, but time at home with the family was paramount.  He enjoyed golfing, woodworking, machine tools, and biking.  He was ever the philosopher and teacher to all who were within the sound of his voice — always leavening his advice with humor that was sometimes cheeky or “off-color,” but always heartfelt.

Matt is preceded in death by his parents and sister, Florence Kerrigan.  He is survived by his wife of 63 years, Annie; son Matthew Wall Jr., M.D. and wife Barbara; daughter Eileen and husband Jim Mullen; son William and wife Anne; and daughter Kathleen and husband John Versteeg.  His pride and joy in life was his five grandchildren who all benefited from his sage advice.

We were very sorry to hear the news of Matt’s passing. Although we did not know him well, we do know he was a wonderful guy, funny, family oriented and kind. Our thoughts and prayers are with the whole family during this difficult time.

Matt was a pleasure to be around. He brought intellect, humor and simply an enjoyment to our Bible studies. Shortly after meeting Matt, I was reading a documentary type chemical engineering book, “Technology’s Harvest,” which referred to a man Matty Wall. Relative to the content, I thought to myself I would like to talk to that guy. At the next Bible study, I asked Matt what his last name was, then what he did prior to retirement- I quickly realized I had been sitting next to the man I wanted to meet all along! He did not realize he was in the book; I made sure he had a copy shortly thereafter. He was one of my mentors I will miss; what a great man.

He was a great dad and Father

As a OLD lab member F
from 1952 to 1958 and then onto New York and beyond, Matty was the ultimate gentleman .

I am saddened to learn very late that Matty has passed. Matty was a fascinating person to listen to on a very broad palette of subjects and he always had good advice. He will be missed.